The presumptive Democratic presidential nominee on June 30 slammed the Trump administration's response to the coronavirus pandemic and his reaction to a bombshell New York Times report.

Biden, the presumptive Democratic presidential nominee, told reporters Trump has “a lot to answer for” concerning news reports that he was advised as early as March 2019 of intelligence that suggested Russia was offering bounties to the Taliban for the deaths of Americans. And, in prepared remarks, Biden accused Trump of “waving the white flag” as coronavirus cases spike nationwide and the death toll surpasses 125,000. 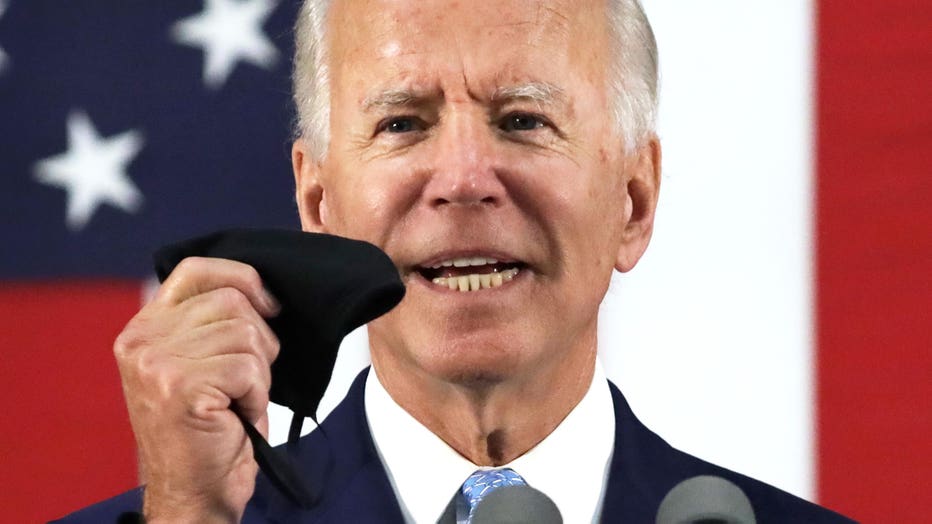 Democratic presidential candidate, former Vice President Joe Biden holds up a mask as he speaks during a campaign event June 30, 2020 at Alexis I. Dupont High School in Wilmington, Delaware. Biden discussed the Trump Administration’s handling of the

The one-two punch reflects the core of Biden’s candidacy, which he built on the argument that Trump is morally and temperamentally unfit to lead the nation. He sought again Tuesday to draw sharp contrasts with his own experience and style as a former vice president and longtime senator.

Biden stopped short of saying Trump had violated his oath of office or should face any consequences from Congress based on any inaction on potential Russian bounties. But he called it “an absolute dereliction of duty if any of this is even remotely true,” and, in that case, he added, “the public should, unrelated to my running, conclude that this man is unfit to be president of the United States of America.”

The Associated Press has reported that at least one of Trump’s daily intelligence briefings included evidence of Russian bounties. Trump has insisted that he was never briefed on such details because they weren’t credible.

Biden said Tuesday he has not had a classified briefing on the material or on Trump’s handling of it, but he said he may request one soon. Major-party nominees receive daily intelligence briefings, but Biden is not yet the official nominee, and he noted that he no longer has access to the same classified information that he could regularly review during his two terms as vice president.

Biden throughout the campaign has hammered Trump for “cozying up” to Russian President Vladimir Putin and other autocrats, and Biden warned as recently as Monday that Putin’s long-term goal is to destabilize NATO and Western alliances that have been in place since World War II.

Biden said Trump should have called his military and national security team together to reconcile any intelligence discrepancies on the Russian bounty reports. “He should have, at a minimum, picked up the phone and said, ’Vladimir, old buddy, if any of this is true … you’ve got a big problem,” Biden said.

The 77-year-old Biden also used Trump’s explanations – that he didn’t know about any such intelligence reports – to turn the tables on the president’s frequent mockery of Biden’s mental acuity. Biden said Trump, 74, “doesn’t seem to be cognitively aware,” and he embraced the possibility of general election debates. “I can hardly wait to compare my cognitive capability to the cognitive capability of the man I’m running against,” Biden said.

On the coronavirus, Biden lambasted Trump for not harnessing the power of the federal government.

Biden said he’d implement a national system of testing for the virus and tracing the exposure path of those who are diagnosed. He said that’s necessary to restore the confidence that businesses, workers and consumers need to jump-start the economy. Biden added that widespread use of masks and social distancing practices must become normal protocol for the “foreseeable future,” and he warned that COVID-19 “will likely worsen” during the coming flu season.

He cast Trump as wanting to be a national “cheerleader” without backing it up with hard truths and action. “We need a president, Mr. President,” Biden said.

Trump's reelection campaign countered that the president has been at the forefront of the nation's coronavirus response.

While “Joe Biden spent the last 5 months trying to come up with a plan, the President has been leading one that slowed the spread, made us the world leader in testing, and reopened our economy,” Ali Pardo, deputy communications director, said in a statement.

The former vice president said that one of his first actions as president, if he wins, would be to ask Dr. Anthony Fauci, the federal government’s leading infectious-disease expert, to continue serving. Trump has often contradicted Fauci’s guidelines on the coronavirus. Fauci warned at a Senate hearing Tuesday that he wouldn’t be surprised if the daily count of new cases reaches 100,000 without further intervention.

Biden delivered his remarks just miles from his residence, where he’s spent most of his campaign time since early March. That's when governors and mayors around the country first began issuing stay-at-home orders and social distancing guidelines to prevent the pandemic’s spread.

For the first time, Biden weighed in Tuesday on the widespread push to take down monuments and honors for long-dead Americans who held white supremacist views. He drew a contrast between Confederate Civil War figures and those who helped found the nation, even if they owned slaves.

“The idea of comparing whether or not George Washington owned slaves or Thomas Jefferson owned slaves and somebody who was in rebellion, committing treason, trying to take down a union to keep slavery -- I think there’s a distinction there,” Biden said.

He said statues of Washington and Jefferson should be protected, despite the fact “they may have things in their past that are now, and then, distasteful.”