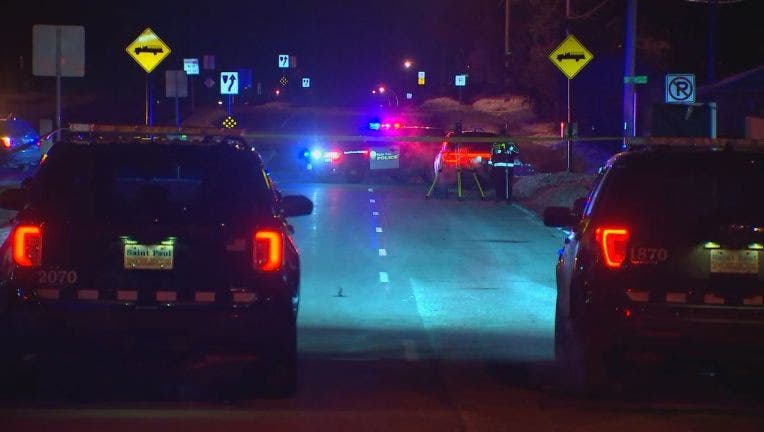 Authorities investigate a deadly hit-and-run crash of a pedestrian at McKnight Road North and Margaret Street in St. Paul. (FOX 9)

Robert Wilson Kinney, 57, of Minneapolis has been charged with criminal vehicular homicide. He faces up to 10 years in prison and a $20,000 fine.

According to St. Paul police, around 8:37 p.m. Friday Jan. 22, officers responded to McKnight Road North and Margaret Street, where a man had been fatally struck by a vehicle. The man was later identified as John Benjamin.

Police learned Benjamin was returning home from a nearby liquor store when the crash happened, according to the charges. Surveillance video showed him leaving the store around 8:06 p.m.

According to the criminal complaint, an anonymous tipster identified the hit-and-run driver as a regular at the 5-8 Tavern Grill and claimed he had been drinking at the bar the night of the crash. Bar surveillance video showed Kinney drank eight double Tito's over the course of three hours, paid his tab and left around 8:23 p.m. The bar is located a few blocks away from the crash site.

When officers arrested Kinney on Tuesday, he was in his garage and told police he needed to go to the parts department, the charges state. Police noticed a large dent on the vehicle and saw a portion of the bumper on the same side was missing.

According to the complaint, in a police interview, when asked if he knew anything about the deadly hit-and-run, he said, "I know there's damage on my car, but what was the result of the damage?" When asked if he stopped anywhere before going home that night, he asked for a lawyer.

Vehicle debris recovered at the scene "showed an association" with Kinney's car, the charges state.

Kinney has two previous DWI offenses on his record, according to the charges.