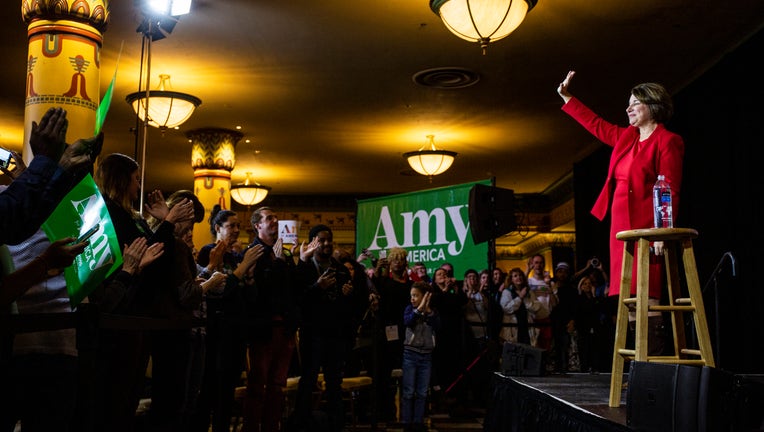 (FOX 9) - Amy Klobuchar, the seventh Minnesotan to launch a serious presidential bid, ended her campaign Monday like all those who came before her: short of winning the White House.

Klobuchar dropped out of the 2020 Democratic presidential race Monday afternoon. A campaign spokesman confirmed the news and said she was flying to Dallas to endorse former Vice President Joe Biden at a Monday evening rally.

Supporters react after Amy Klobuchar drops out of 2020 race

Supporters react after Amy Klobuchar dropped out of the 2020 race.

“The Klobuchar campaign confirms the Senator is flying to Dallas to join Vice President Biden at his rally tonight where she will suspend her campaign and endorse the Vice President,” Klobuchar's press secretary, Carlie Waibel, said in a statement.

Her exit follows rivals Pete Buttigieg and Tom Steyer, who abandoned their bids this weekend, as the race consolidates around frontrunners Bernie Sanders and Joe Biden.

Klobuchar's decision came just two hours after she did a scheduled rally in Salt Lake City, where she showed no signs of getting out of the race. She criticized President Donald Trump and said of her own campaign, "The fact that I'm still standing here is quite a tribute to grit."

Klobuchar told FOX 9’s Leah Beno on Sunday she was in the race for the long run.

"You know I’m running all the way," she said. "I wouldn’t have done this from the moment I announced in a blizzard if I didn’t think I was the best candidate to lead our party and to be president."

The reasons for Klobuchar's decision are multiple: Biden's strong showing in South Carolina, her own back-to-back sixth-place finishes, and a persistent inability to connect with black and Latino voters. A final, unceremonious blow came Sunday night: her campaign made the last-minute decision to scrap a homecoming rally in St. Louis Park when protesters upset with Klobuchar's record as Hennepin County prosecutor took over the stage and wouldn't leave.

Facing the grueling prospect of a two-day swing through six states ahead of Super Tuesday, Klobuchar decided to pull the plug.

Klobuchar's centrist positions and record in the U.S. Senate won her the endorsements of more than a dozen newspapers across the country. But those same positions failed to win over progressive voters, who never warmed to her campaign.

Money, always an issue in Klobuchar's homegrown bid, likely proved a sticking point up to the end. The middle of February, the campaign said it raised $12 million in a roughly one week period between the New Hampshire debate and her third-place finish in the Granite State. The campaign never provided another fundraising update to reporters, suggesting the numbers weren't good. All the talk about dropping out wouldn't have helped bring in would-be donors.

Klobuchar outperformed expectations set for her in November and December, when she polled in the low single digits. But her high-water mark proved to be in New Hampshire, where she finished in third place. It looked like a surge at the time (pundits debated whether to call it "Klo-mentum" or a "Klobu-surge") but New Hampshire's mostly white voters did not forecast her struggles to attract minorities in Nevada and South Carolina.

Already struggling with black voters, the Associated Press in January raised major questions about Klobuchar's 2003 prosecution of Myon Burrell, then a 16 year old, for the killing of an 11-year-old girl in Minneapolis. The AP detailed a lack of hard evidence in the case.

The Minneapolis NAACP and others called on her to quit the race. Klobuchar got asked about it on the debate stage and in national TV interviews, where she explained little about her 2003 decision to prosecute but called for new evidence in the Burrell case to be reviewed.

Klobuchar's decision to drop out leaves the Minnesota Democratic primary ballot littered with candidates who are no longer in the race. Since the DFL ballot was set in December, ten of the 15 candidates have dropped out, but will still appear on the ballot.

Many voters likely chose a candidate who has since dropped out. Under Minnesota law, the deadline for voters to claw back their ballot and re-vote was last Tuesday.

The only candidates on the Minnesota ballot who remain in the Democratic race: Sanders, Biden, Mike Bloomberg, Elizabeth Warren and Tulsi Gabbard.