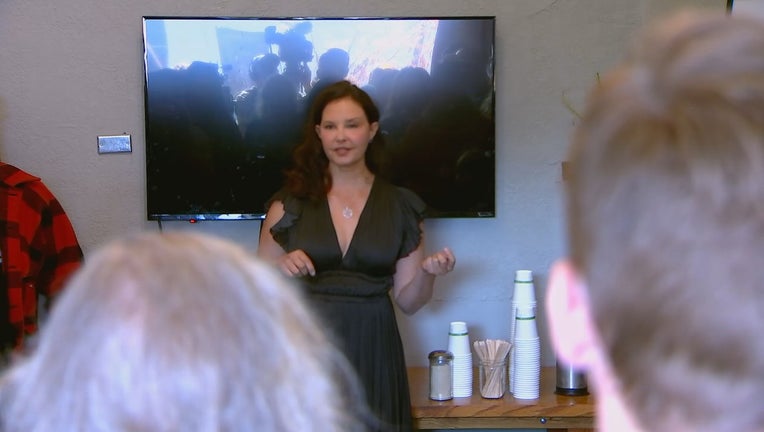 ST. PAUL, Minn. (FOX 9) - Actress and Elizabeth Warren supporter and surrogate Ashley Judd was in town for a rally on Saturday as Warren and other candidates turn their focus towards Minnesota and other Super Tuesday states.

Minnesota's delegates are among those candidates will be fighting on Super Tuesday, the biggest day so far campaigns.

Actress and Elizabeth Warren supporter and surrogate Ashley Judd was in town for a rally on Saturday as Warren and other candidates turn their focus towards Minnesota and other Super Tuesday states.

While Warren was not in town, Judd spoke with voters during a meet and greet to go over the Massachusetts senator's policy. Judd also helped kick off a Warren canvass rally in St. Paul.

Limited polling has Senator Amy Klobuchar with a six-point lead in her home state with Sanders and then Warren trailing.

Super Tuesday will be a make-or-break day for many candidates and Judd says she's doing everything to support Warren.

"Campaigning for Elizabeth Warren has been a real delight with all volunteers here are energized, are canvassing, they're phone banking," explained Judd. "The Democratic voters are super energized, they want good structural change."

Judd will host two other events in St. Paul on Sunday as well. However, she is just the start of the political push, as more candidates and surrogates will hit the ground in Minnesota with hopes to make an impact on the polls leading up to Tuesday's vote.

Sunday, Klobuchar plans to rally in St. Louis Park while local supporters will host Get Out the Vote rallies in Rochester and St. Paul beforehand. She will also return to Minnesota for a Super Tuesday watch party with supporters.

For Mike Bloomberg, who has already visited Minnesota twice this primary season while opening multiple campaign offices in the state, former NFL linebacker Dhani Jones will appear at three events in Minnesota on Sunday.