Exactly 70 days after being admitted to Regions Hospital in St. Paul&nbsp;for severe COVID-19 symptoms, 74-year-old Glenn Vierling is finally back with his family. His battle with the coronavirus, however, isn’t over yet.

ST. PAUL, Minn. (FOX 9) - Exactly 70 days after being admitted to Regions Hospital in St. Paul for severe COVID-19 symptoms, 74-year-old Glenn Vierling is finally back with his family. His battle with the coronavirus, however, isn’t over yet.

On Wednesday, Glenn’s wife and son were allowed to enter his ICU room and see him in person for the first time in 10 weeks.

"When I was crawling out of that imaginary hole that day," said Glenn. "I thought I was dying."

"We was walking, talking when he came in and was able to tell him before he got intubated, he was able to tell us he was a fighter and he wanted to make it," said Alicia Kniefel, an ICU nurse. "And to see him go through just so much, just so many different things, some days were really, really tough for Glenn, for the staff."

Kniefel has been by Glenn’s bedside since he arrived Nov. 18. Regions medical staff have been behind the countless video calls with family as Glenn spent more than six weeks taking what he refers to as a "long nap."

Through part of his coma, Glenn’s wife of 42 years spent a month at another hospital with her own battle with COVID-19.

The new year brought renewed hope for this retired St. Paul city bus driver. On Jan. 15, Glenn woke up. Now on the mend, he’s excited to see his two-year-old grandson again. Glenn’s family is beyond thankful to the team who made it possible. 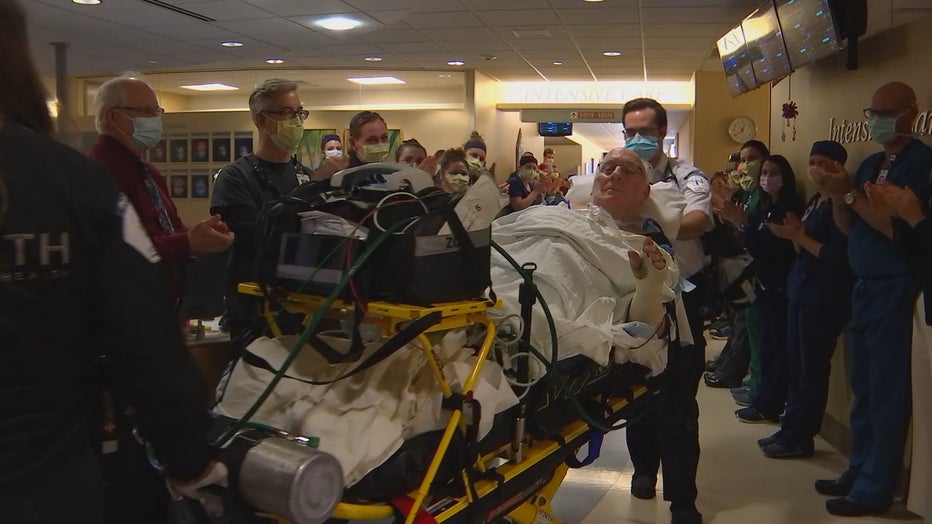 "You are no. 1 because you were his family when we couldn’t be and we thank you so much for that," said Dianne Verling to the medical staff who gathered to celebrate Glenn's release.

Hospital employees applauded as Glenn was wheeled out of his room Wednesday. While he may be released from their care, he will continue to be dependent on his ventilator. He also will be transitioning to a rehabilitation facility, where he will spend at least the next 30 days.

"It happens a lot more, a lot of these patients are leaving on ventilators or not leaving at all," said Rachael Besch, a respiratory therapist.

"He has a long, long road ahead of him, but I think he’s ready for it," said Kathleen Schaefer, a physical therapist.

The Verlings know they are fortunate to be celebrating a COVID-19 survivor, but pray the families of those still fighting see Glenn's story and see some hope.

"I wish every single person in one of these rooms will get that and have that because we know what their families feel like," said Dianne. "And the staff here, they are angels. Simple as that. They are angels."