ST. PAUL, Minn. (FOX 9) - More than three years after her son's death inside the Beltrami County jail, an inmate's mother is continuing her call for action.

Del Shea Perry has vowed to continue to fight until she gets justice for her son, describing his death as "torturous" inside the county jail in Bemidji.

Del Shea Perry has vowed to continue to fight until she gets justice for her son, describing his death as "torturous" inside the county jail in Bemidji.

Perry remains convinced that jail staffers and the medical team in charge of his care misdiagnosed his condition, believing Hardel was faking his symptoms.

On Friday, Perry who has since founded the group Be Their Voices, lead other advocates and activist organizations in protest outside the Minnesota Board of Medical Practice in Saint Paul.

They chanted, "end MEnD now" over and over. MEnD is the jailhouse healthcare provider employed by Beltrami County during the death of Hardell in September 2018.

At the time, Hardel’s worsening symptoms were captured on in-house jail cameras over several days. FOX 9 has reported extensively on the case.

His mom subsequently filed a federal civil rights lawsuit against those responsible for her son’s care including MEnD. 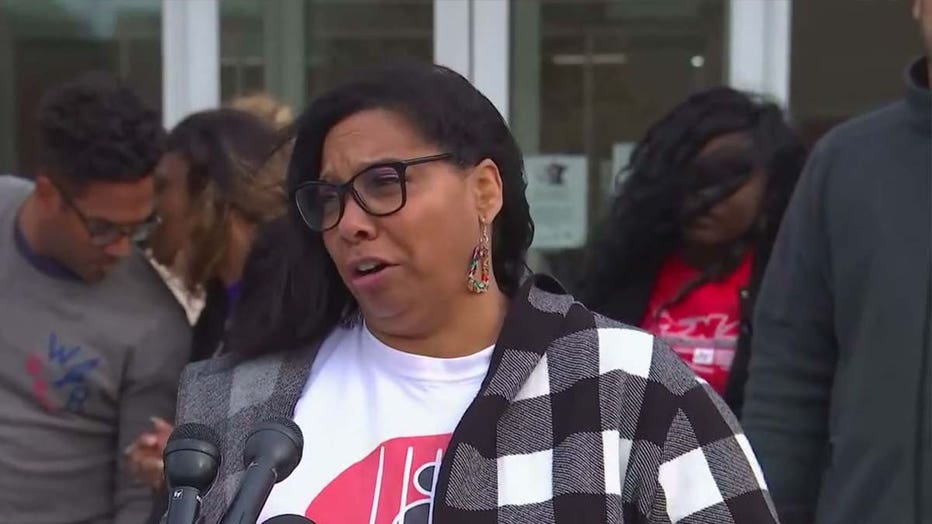 Del Shea Perry has vowed to continue to fight until she gets justice for her son.

Joining her at Friday’s protest were a couple members of the Minnesota Nurses Association, demanding the state board put MEnD out of business.

"When is it going to stop? When is it going to stop," asked MNA member Jeanette Rupert, who is a registered nurse as well. "Unfortunately, as a health care professional, I'm embarrassed because it doesn't have to be. That is a poor representation of the oath and the care that we swore to give. It's got to stop."

"It’s time to take a stand because it time to end MEnD," said Perry. "We cannot continue to stand by and allow this to happen. What if this was your son or daughter? You’d be out here just like I am, fighting tooth and nail. My life came to a complete halt 3 years ago and they’ve been able to go on with their lives as if nothing ever happened. Enough is enough. Enough is enough."

Perry was the driving force behind the Hardel Sherrell Act that passed the Legislature with bipartisan support earlier this year, improving standards and conditions inside the state’s correctional facilities.

Her federal lawsuit connected to her son’s death continues, though several months ago, one of the parties, Sanford Health and its hospital in Fargo where Hardel was briefly taken while his condition was deteriorating, settled for an undisclosed amount of money.

MEnD sent FOX 9 this statement on Friday: "Mr. Sherrell’s death was a tragedy and we continue to extend our profound sympathy to his family for their loss. Even so, we respectfully disagree with the contention that our care played a role in his passing. We’re confident that the board’s review of the facts in this case will come to the same conclusion."

FROM 2019: ‘Egregious and disturbing’: After son dies in county jail, a Minnesota mom takes her fight to court