BEMIDJI, Minn. (FOX 9) - A Twin Cities mom is fighting for justice after her seemingly healthy son died in custody just days after he was transferred to the Beltrami County Jail in Bemidji.

She recently filed a federal lawsuit claiming her son’s rights were violated through negligence and medical malpractice. She insists the jailhouse security camera footage that she obtained through her legal team proves it. 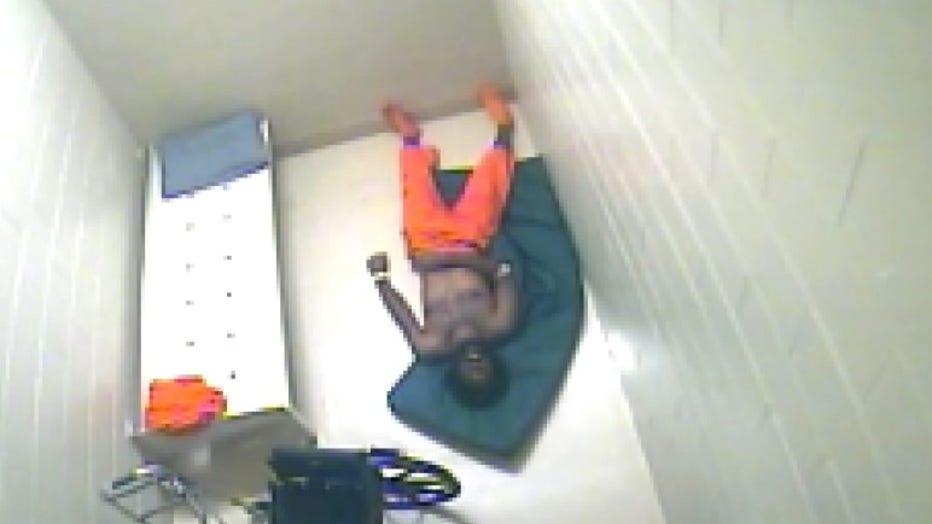 This 27-year-old died in Beltrami County Jail and now his family is suing the county, the jail and the medical professionals they say misdiagnosed the man, leading to his death. (FOX 9)

“Let me just say, what I saw was despicable,” said Del Shea Perry, the mother of Hardel Sherrell, who died at age 27 in the jail.

Perry said she had to watch the video, which she shared with FOX 9, with her own eyes so could be certain of what truly happened.

“Why would they have left my baby on that floor?” Perry asked.

Her only child died just days after arriving at the Beltrami County Jail last year. At the time, the community was outraged and demanding answers with several protests close to family’s east metro home.

“I’ve had to relive his death over and over again,” Perry explained.

Clutching her Bible for strength during a recent interview, Perry recounted that she was haunted by a jailhouse phone call from Sherrell days before he passed away, where he allegedly told her he was in excruciating pain and would rather die because he couldn’t get any help.

“He said, ‘Mama, get a lawyer and have them look at the video cameras because they’re mistreating me in here,’” she recalled.

“Everyone deserves to be treated as a human being,” said Zorislav Leyderman, the family’s attorney.

With Leyderman’s help, the family filed a federal civil rights lawsuit against Beltrami County, the Corrections Staff and the medical providers responsible for Sherrell’s care.

They describe what happened as a total system failure after gathering and reviewing the video, the medical records and their own investigation.

“I’ve seen a lot of things happen in jails and Department of Corrections prisons and this is by far the most egregious and disturbing case I have seen,” Leyderman said.

Sherrell arrived at the jail in Bemidji on Aug. 24, 2018. At about 5:30 p.m., security cameras captured him in good health and in good spirits, seemingly joking around with an unidentified Corrections officer.

Perry concedes that her son wasn’t perfect, having several criminal convictions on his record over the years including child endangerment, domestic abuse and theft.

In fact, he was moved to Beltrami County after his arrest as a felon with a gun.

But, Perry insists the father of three was there to do his time and pay his debt to society.

“The ultimate justice would be to bring my son back and obviously, that’s not going to happen,” said Perry.

The suit details a rapid medical deterioration, with Sherrell first complaining of a headache, then chest and back pains and, eventually, a loss of feeling in his lower extremities.

He would eventually fall out of his bunk and a wheelchair before jail and medical staff transferred him to the nearby emergency room and eventually a Fargo hospital so he could get an MRI.

Leyderman reports the tests were inconclusive and Sherrell was sent back to jail with a primary diagnosis of “malingering” and “weakness.”

According to his court filing, correctional staff was instructed that if Sherrell displayed signs of stroke or paralysis or loss of bladder control, to get him back to the ER immediately, but that never happened according to the records they obtained.

“I’ve read all the records and seen all the videos given to us and they just thought he was faking,” said Leyderman. “So, it appears they thought he was going to have his thing, have his episode and that’s how he died.”

Officially, the Ramsey County Medical Examiner ruled Sherrell died of pneumonia on Sept. 2, just over a week after he was booked into the jail. Perry’s legal team, however, ran their own post-mortem tests and found Sherrell was suffering from Guillain-Barre Syndrome.

The Mayo Clinic describes it as a rare disorder where a body’s immune system attacks the nerves, eventually leaving a patient paralyzed.

That’s what Perry sees happening in the video as jail staff appear to ignore Sherrell’s symptoms, at times leaving him hanging off his cot and sometimes face down on the floor for hours, according to the time stamps.

With proper medical care, Leyderman insists the condition is treatable and isn’t a death sentence.

“It’s like somebody putting a pillow over your mouth and slowly losing the ability to breathe, and that’s how he spent his last day,” Leyderman said.

“If he had stayed in the hospital, my son would be alive today,” said Perry.

The Department of Corrections, which reviews all of the state’s in-custody deaths, eventually determined there were “no violations” committed by Beltrami County in Sherrell’s death.

It’s something Perry just couldn’t believe, especially after she learned he was the third person to die in the Bemidji Jail over the last few years.

So, she is committed to taking her fight for justice to the courts, attempting to hold the jail and its staff accountable for not recognizing the life and death situation and the medical professionals for not doing further testing to properly diagnose her dying son.

“Jobs need to be lost,” Perry said. “Criminal charges need to be filed and I sure hope they know how to ask God for forgiveness.”

Beltrami County declined to make anyone available for an interview about Sherrell’s death. In an email to FOX 9, the county’s attorney denied the allegations in the lawsuit and reported that they will be filing a response with the federal courts in the weeks ahead that will include their version of the facts.

Sanford Health, which provided Sherrell’s hospital care, said it could not comment on a specific individual, but wrote, “The safety of all patients and the quality of care they receive is our top priority.”

The jail’s in-house medical contractor did not respond to FOX 9’s inquiries.