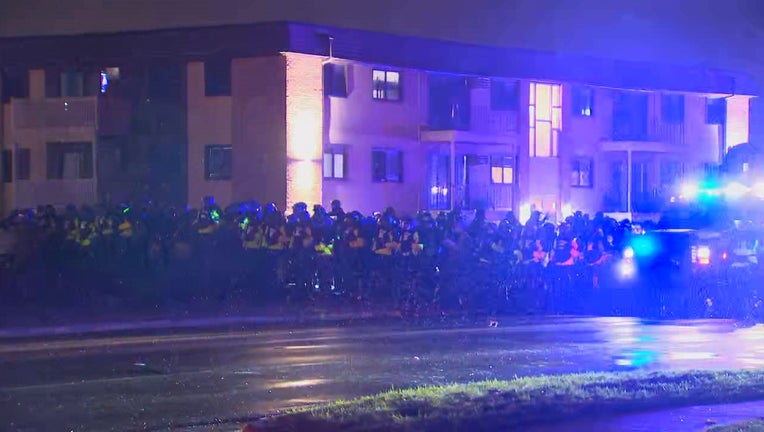 After declaring an unlawful assembly, law enforcement issued dispersal orders to the protesters outside the Brooklyn Center Police Department on April 13, 2021. Officials arrested some protesters. The rally was held for Daunte Wright who was shot and (FOX 9)

(FOX 9) - Some cities in the Twin Cities metro have issued curfews Wednesday night, while Minneapolis decided not to institute one.

Brooklyn Center has been the site of protests and clashes with police following a deadly police shooting. In a news conference Wednesday afternoon, the city announced a curfew starting at 10 p.m. and expiring at 6 a.m. Thursday.

In neighboring Brooklyn Park, the same 10 p.m. to 6 a.m. curfew is in effect.

The city of Champlin’s curfew will begin at 9 p.m. and expire at 6 a.m.

Minneapolis decided against a curfew Wednesday night after no looting arrests or business break-ins were reported Tuesday night. The city urged residents to leave 911 open for emergencies and to call 612-673-5335 for tips about suspicious activity that does not require emergency response.

The city of St. Paul also opted to not institute a curfew Wednesday night and similarly urged residents to avoid calling 911 except for emergencies. The non-emergency tip line is 651-291-1111.

Be sure to check with your city to see if and when curfews are established Wednesday night.