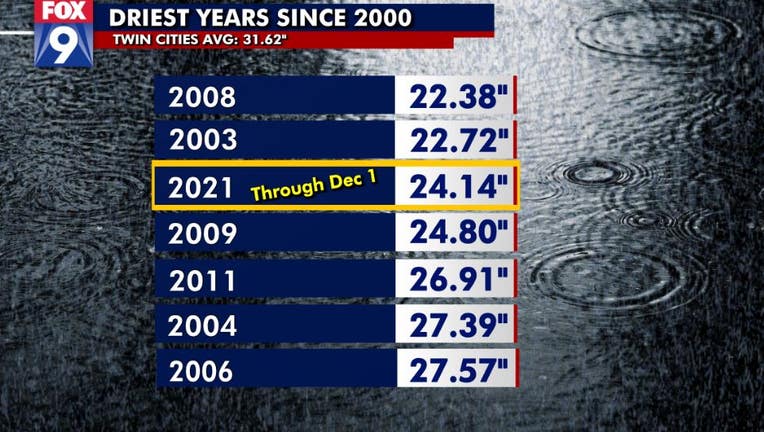 (FOX 9) - It may not be the greatest timing to talk about how dry it is considering we just received a tenth to two tenths of an inch of liquid with some rain showers Tuesday night, but that has not been a trend for much of the year.

This was the first accumulating precipitation in the Twin Cities in more than two weeks when our first inch of snow of the winter season fell on the 13th. Now we're done with November, finishing out with barely half of our average liquid for the 30-day stretch. This has certainly been a theme through the course of the year as November becomes the ninth month of 2021 with precipitation below average.

2021 was the first year in nearly a decade that was plagued by drought in much of the state. While some areas significantly improved late in the summer and through the fall, many areas are still dealing with unusually dry conditions and that includes the Twin Cities. 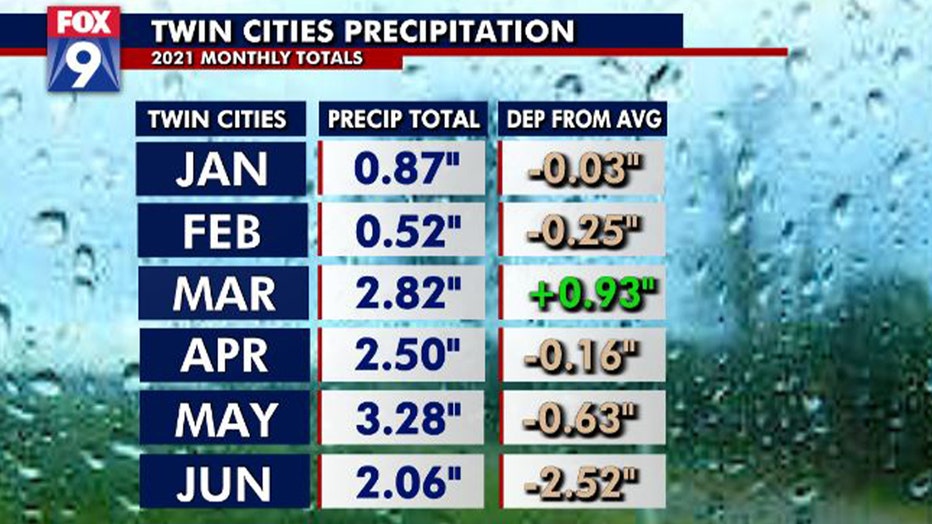 The year started on a fairly normal pace with rainfall perfectly normal overall through the end of May. But then, our hot and dry stretch began as soon as we hit June and really grabbed hold in July. The combo of well above average temps and almost no rainfall for weeks on end, leading to one of the most intense droughts seen in the state in the last 50 years.

Finally though, the skies opened up in August as we were deluged with nearly 7 inches of rain. The problem though is that most of that fell in just a couple of heavy rain events. While the heftier rain was a blessing, most of it became runoff and didn't help ground moisture as much as it could have. 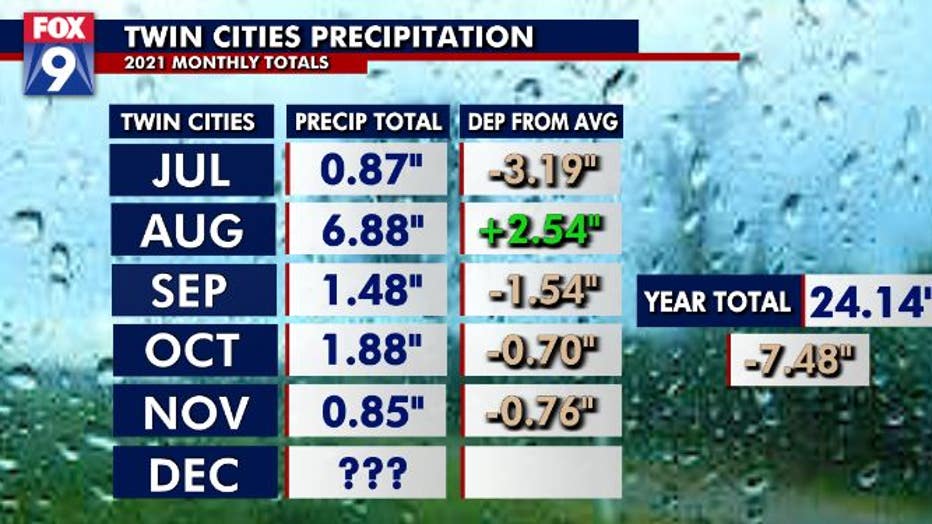 Since mid-August, it's been DRY. We've received less than half our average rainfall for the fall months as we remain in a moderate drought across the Twin Cities with severe drought conditions remaining in much of northern Minnesota. For the year, we just topped 2 feet of liquid moisture through Dec. 1 which is more than 7 inches shy of average for the year as a whole. We average right about an inch of liquid during the month of December. So for argument's sake, IF we see typical moisture over the next four weeks, it will still be the driest year since 2009.

To put all of this into perspective on just how dry we've become, we experienced our wettest year on record just two years ago in 2019. We received more than 43 inches of rain that year, nearly 20 inches more than this year. Whoa.

Get the FOX 9 Weather App to track winter weather live on your phone, with future radar, live streaming video of FOX 9 coverage and alerts and forecasts customized for your current location and favorite locations. Download it for Android or Apple.