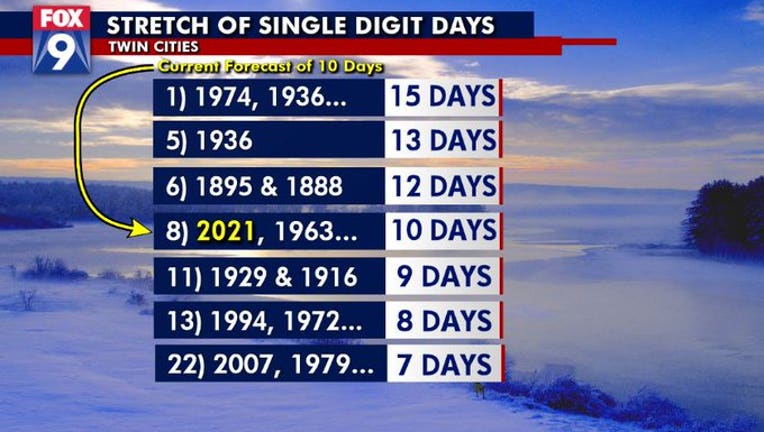 When we get through our current forecast on Monday, it will be the longest stretch of high temps this cold since 1974 and tied for 8th place overall. (FOX 9)

(FOX 9) - The Twin Cities metro has now been in the deep freeze for several days, and unfortunately we have several days to go…and it may just get worse before it gets better.

As of Thursday, we have seen five consecutive days with high temperatures in the single digits or colder. This stretch is likely to continue to at least Monday. That means we’ll have at least 10 days in a row where temps don’t make it above 9 degrees.

While this may seem common in the Twin Cities metro, it’s not. We haven’t seen a stretch like this since we had 15 consecutive days back in 1974. The closest was seven straight days in 2007.

Thursday’s forecast: COLD! with a dusting of snow possible

Most likely won't get above zero this weekend. Dangerous wind chills and temps so take precautions.

In a "typical" winter, (if there is such a thing) we certainly see plenty of frigid days where temperatures get and sometimes even stay below zero. But often times it’s for fairly "short" periods of time. We’ll dip to the deep freeze for three or four days, and then we get some relief, climb back to the teens or even 20s for at least a couple of days and then likely do it all over again. It’s a bit of a roller coaster ride.

But this time, we’re stuck in this very cold and fairly dry pattern for nearly a week now, with potentially another week to go.

While record low temperatures near 30 below zero in the metro are likely safe, we could get pretty close to those numbers this weekend. The forecast can certainly shift a little bit, but the dangerous cold will likely peak this weekend and into Monday before we slowly start to climb out of the cellar by the middle of next week.