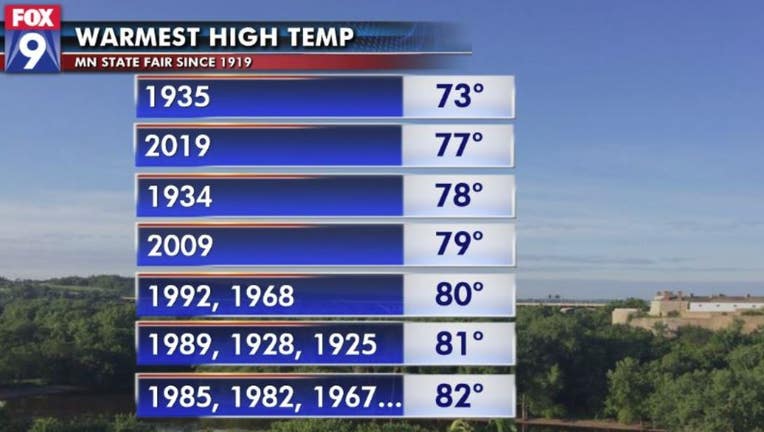 FALCON HEIGHTS, Minn. - There’s a reason why it’s called the Great Minnesota Sweat Together. During the “average” year, at least a few of the 12 running days during the fair see afternoon temperatures in the 80s or 90s with plenty of humidity. Combine that with a 300-acre plot and two hundred thousand of your closest friends, and it can get a bit sweaty for even the most avid warm weather lover. But this year was totally different.

The 2019 Minnesota State Fair may go down as one of the most pleasant stretches of weather in the history of the Twin Cities. Clearly, that’s a bit of an exaggeration and of course, it’s all who you talk to. What’s pleasant for me may not be pleasant for you. But there’s no denying that the weather this year as a whole was consistently comfortable considering it’s a time of year that can be aggressively warm. In fact, this is the coolest year for overall high temperatures since 1935.

Now, this statement is a bit of a misnomer. There have easily been years that have had far cooler days. The years where a day or two with highs in the 50s or low 60s with rain and wind… I mean it can get pretty ugly. But even in those years, that hiccup in the forecast only lasts for a brief time before temperatures soar again well into the 80s or 90s. I mean, as recent as 2013, we had high temperatures during the 12 days of the fair ranging from 68° to 97°.

But this year, it was the consistent pleasant conditions that likely made it one of the most comfortable fairs in history. Over the last 100 years, only 4 have seen temperatures not cracking 80°. That includes years before the current 12-day format ending on Labor Day. Before WWII, the fair was only 8 days and always in September. On average, that would make it even more difficult to get temperatures into the 80s and 90s, and yet it still happened almost every year.

So hopefully you enjoyed our wonderful stretch of weather this year, either at the fair or not, because it doesn’t come along all that much this time of year.