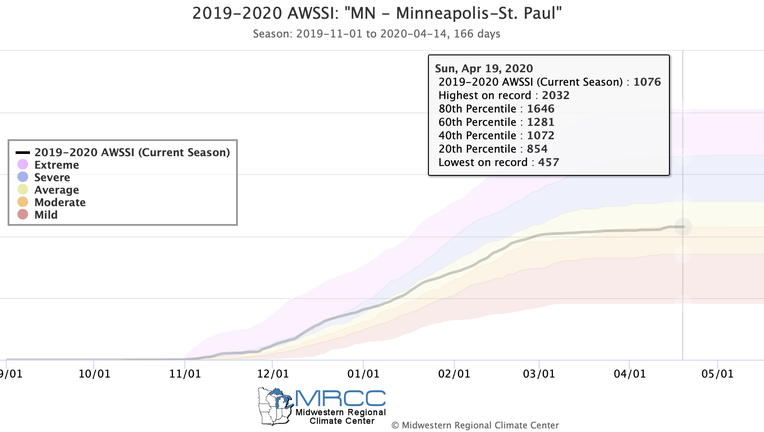 A look at the Accumulated Winter Season Severity Index in the Twin Cities which totals points for wintry type weather to get a objective total for wintry weather each season.

(FOX 9) - It was a pretty typical cold season here in Minnesota. Well, as “typical” as it gets with some bitter cold snaps, several snow storms, and almost persistent snow and ice cover for much of the season. But, Minnesota is about the only state that had a somewhat “usual” winter season.

How can we really compare a winter here in Minnesota to one that’s further to the south, where parkas come out in places like Texas and Georgia when temperatures drop below 50 degrees? I give you the AWSSI.

The Accumulated Winter Season Severity Index (AWSSI) is an objective index to measure winter conditions holding all locations across the U.S. to the same variables and the same standards. The variables calculated are temperatures, snowfall and snow depth. Each variable has a point scale. The more points accumulated, the colder and snowier the winter is.

For example, anytime your temperature dips from 25 degrees to 32 degrees, you get 1 point. If it drops to 20 degrees to 24 degrees, you get 2 points, etc. Similar scales are set for snowfall as well as snow depth. This allows you to calculate a grand total of points at the end of the season to determine severity.

One of the few limitations, though, is that it does not account for wind chill or mixed precipitation like sleet or freezing rain. Both can have large effects on the overall perceived severity of any given winter season, but I guess nothing is perfect.

So now we are not only able to calculate just how severe our winter was, but also that severity compared to the rest of the country. The image below shows our index in graph form through the season. We have calculated a grand total of 1076 points. This is classified as an average winter season because that point total is within 10% of what’s considered an average point total when comparing that number to climatology, which is 1154 for the Twin Cities. So, pretty close to average.

This is far less than last year when we totaled nearly 1300 points, thanks to the copious amounts of snow. We ended last year in the severe category.

But, you can also directly compare our numbers to other locations across the country. Take Chicago for example. They are often called the windy city and get a lot of national attention for how cold and snowy they are. However, their total points this year were barely a third of the Twin Cities, garnering just 361. That means, that under these criteria, the winter in the metro was roughly three times as cold and snowy as Chicago. Looking at their color coded climatology, they are safely in the red zone, which means they had a mild winter when comparing it to average. But even their "average" winter is well behind the Twin Cities, coming in at roughly 700 points. 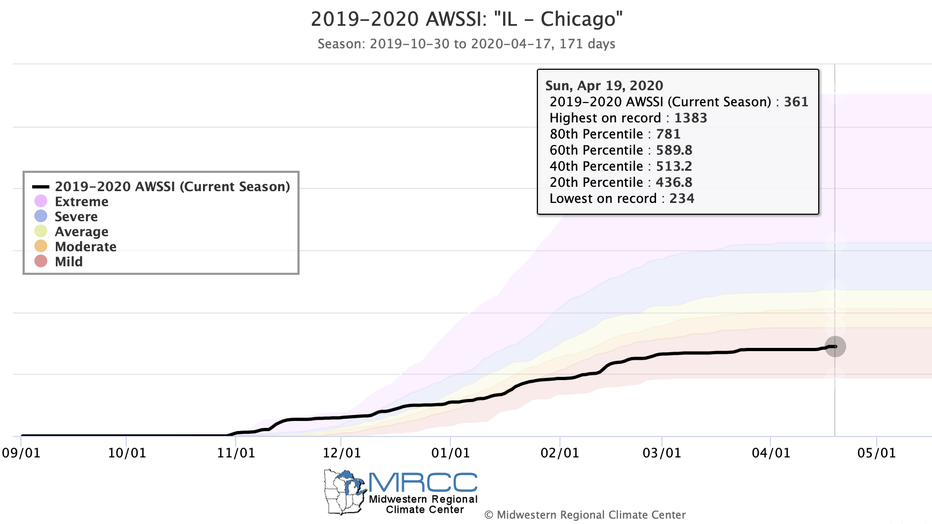 Chicago had a very mild season with 361 points, which is roughly 200 points behind their average.

For locations further south and east, it was the same story with more than a dozen locations coming in with their fewest points on record, indicating that it was likely the mildest winter season in history, at least since the AWSSI began more than 50 years ago. 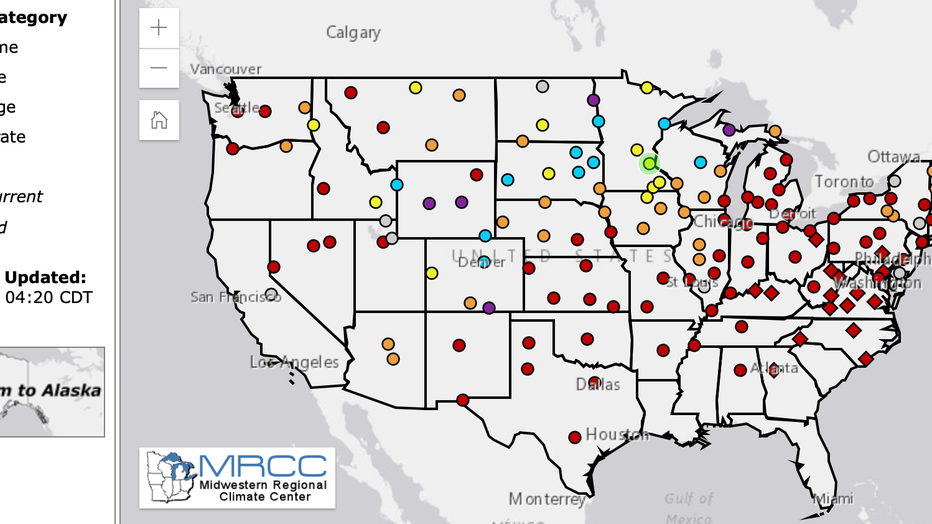 Each colored dot represents a location that is part of the AWSSI tally. All locations that are represented by a red diamond instead of a dot indicate the location had a record mild year. There were more than a dozne locations in 8 eastern states.

Take Atlanta for example. They tallied just 13 points. Keep in mind, however, that their average season total is only about 55, a far cry different from our usual 1000 or more points. 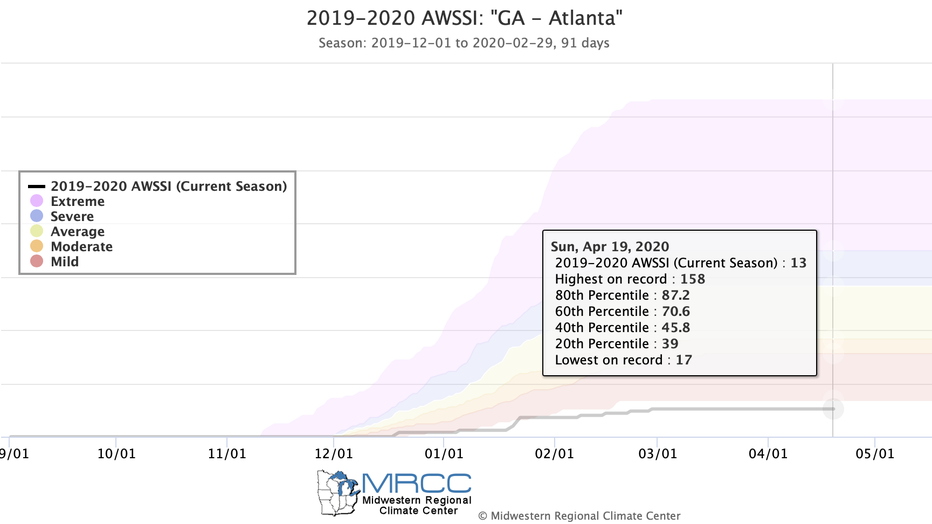 Atlanta averages just 55 points... with their record up to 158. That means that even in their harshest winter, the Twin Cities is at least 5 times more severe.

On the other side of the coin, there were a couple of locations in the Lower 48 that had rough winters… one of those is Grand Forks, North Dakota. They tallied an extreme winter coming in with more than 2000 points, basically double that of the Twin Cities. My how quickly things can change over short distances in the Upper Midwest. 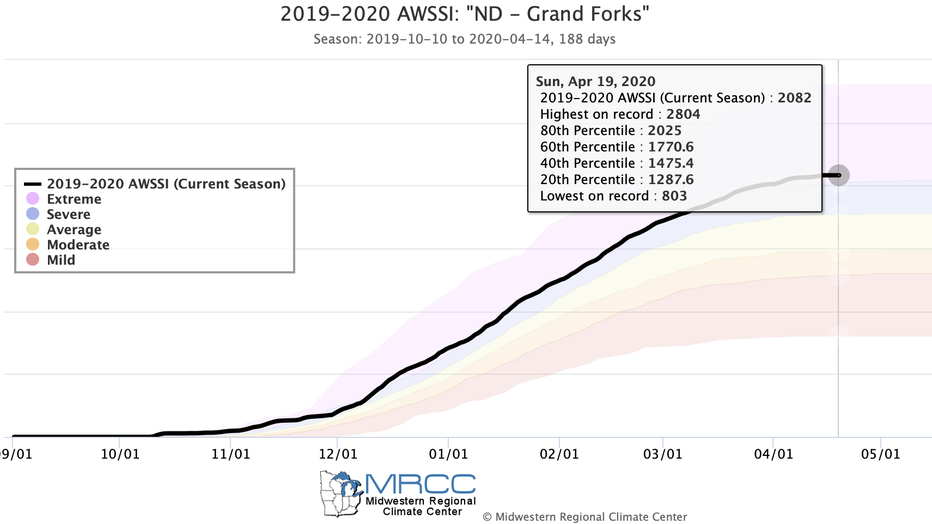 Amazingly, Grand Forks nearly doubled their tally from the Twin Cities with plenty of snow and cold. But if you think 2000 points is a lot... head to Alaska where Fairbanks has totaled more than 4800 so far during the cold season.