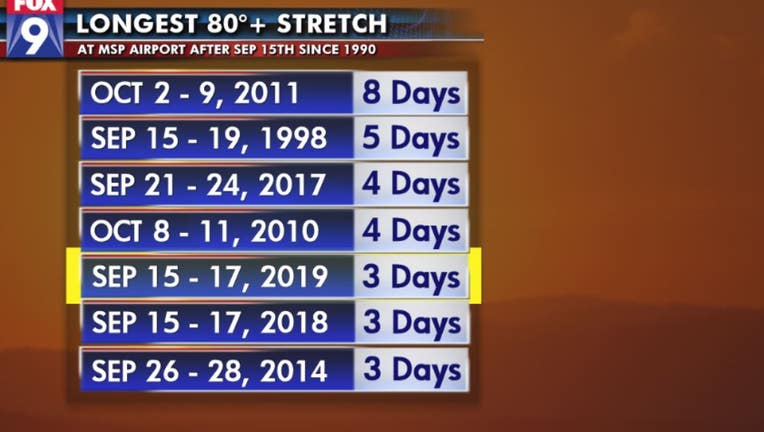 It has been an unusual end to August and start to September. In what can easily be the hottest time of the year turned into one of the most pleasant stretches of late summer we’ve ever seen.  And just when we thought fall was arriving, we’ve seen a return to summer style heat and humidity.

While an 80° day here or there, even 2 at a time, is really quite common in the latter half of September and even the first half of October, getting three in a row or more is much harder to do. Over the last 30 years, there have been 10 occasions (not including our current streak) where we’ve seen temperatures soar passed 80° on or after September 15th for 3 + consecutive days. But 3 of the last 5 Septembers have seen such a streak… and our current stretch will be the fourth.

Now, that 8 day stretch is likely gonna be safe for years to come, but the current forecast gives us 6 of these 80°+ days in a row, which would be the 2nd longest stretch after September 15th over the last 30 years.

Before you ask, there is no current peer reviewed study that would indicate our late heat wave would have any correlation to how much snow and cold we will get over the winter… so let’s just enjoy the warmth while we have it and not focus on what will inevitably be here sooner or later.