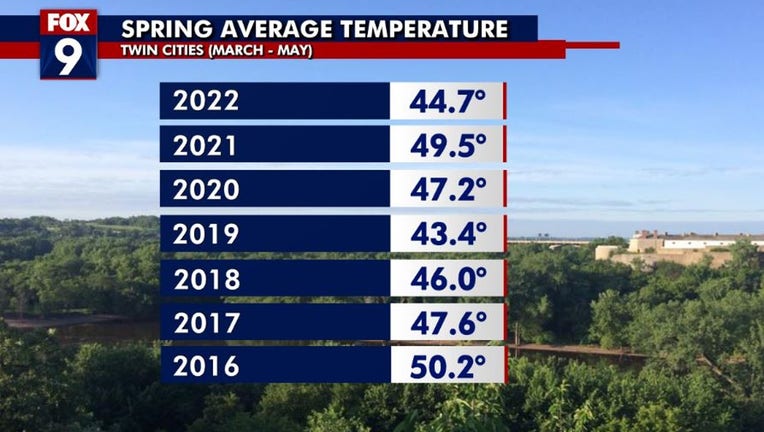 MINNEAPOLIS (FOX 9) - To nobody's surprise here in Minnesota, we just finished up a colder-than-average spring when combining our temps of March, April and May. We finished the three-month period 1.9 degrees below average in the Twin Cities, the first sub-average spring in three years.

This isn't exactly groundbreaking information, but there are certainly a few things of note. While the combination of all three months gave us a sub-average spring, it was really just April that was the issue. March was just about as seasonable as you can get and amazingly May finished nearly 2 degrees above average thanks mostly to our handful of days when temps were close to or into the 90s. That means April dragged down the whole average, finishing the month 6 degrees below the norm.

That was a pretty common theme for much of the Upper Midwest, with northern Minnesota and much of North Dakota as the exception with persistently cool and wet weather. The northern two-thirds of the state finished the season in the top 10 wettest on record with much of the Red River Valley bordering the state having their second wettest spring on record. 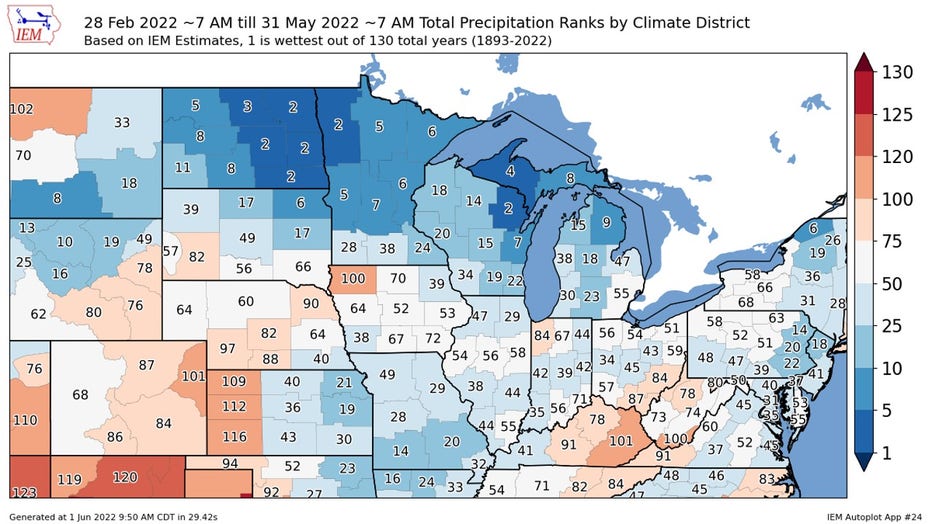 The northern two-thirds of Minnesota finished the spring in the top 10 wettest on record.  (FOX 9)

The overall average for the northern half of the state may have been in the top 10 wettest, but a few spots experienced their wettest spring on record, including International Falls. The city experienced more than double the overall moisture for what typically falls in the spring months. Check out some climate sites across the area:

Because of all the rain in the north, creeks, rivers and lakes are running very high with some of the worst flooding in parts of northern Minnesota in decades. The area right along the Canadian border may arguably be in the worst shape, and that could continue for much of the summer. Here is some info that the National Weather Service out of Duluth has compiled if you're heading up there over the next few weeks:

It was a very wet spring, but it also didn't help the flood situation since the Arrowhead experienced one of the snowiest winters on record, but added more to it in March and April. And with temperatures so cool, much of it melted over the course of a few days in early May. The region had its fourth-coldest spring on record. The rest of the Upper Midwest and Great Lakes leaned on the cool side, but nothing groundbreaking of note. 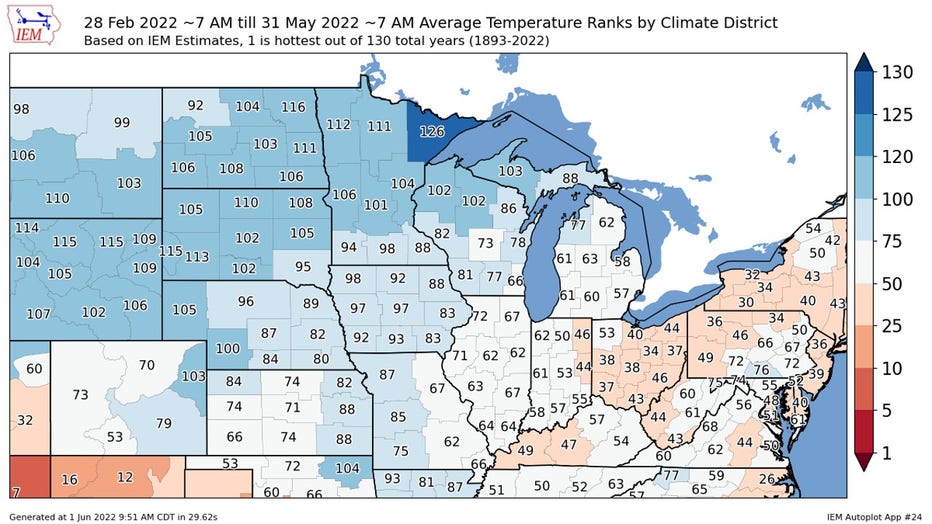 Minnesota saw a colder than average spring this year.  (FOX 9)

While the Twin Cities officially finished a bit below average for temps, and a little above average in precipitation, there was still a lot of variability depending on what part of the metro you're located. For example, my house in Burnsville, which is just a few miles from the official climate site at MSP Airport, finished the spring more than 2 inches shy of the airport. That put my house near normal for spring. There were certainly other locations in the south metro that missed out on a few of the "lucky" rains and finished near normal. Other spots though, especially in the north metro, finished several inches above normal.