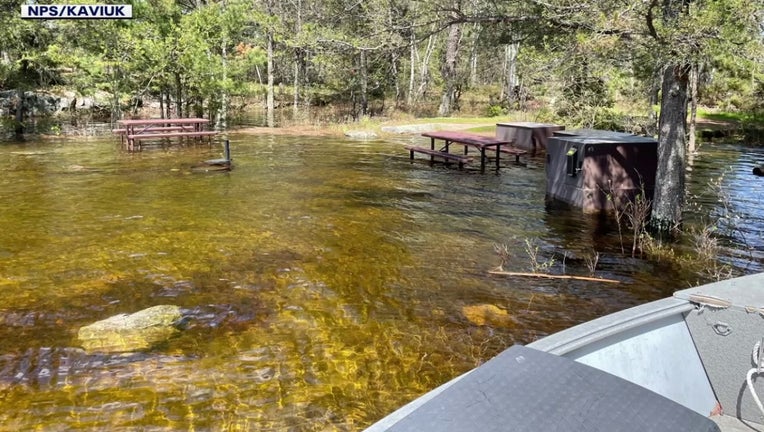 (FOX 9) - As May turns to June, one of the biggest summertime destinations in Minnesota is struggling to stay above water, literally. The snowmelt and major downpours of mid-May are still forcing the water up at Minnesota’s Voyageurs National Park.

A large tourist destination for outdoor recreationists is struggling with flooding after a spring that’s seen lots of rain.

Right now, it’s the Rainy Lake area going under, keeping dozens of campsites closed. The saturated ground is also causing structures to flip while shorelines are eroding, docks are underwater and sandbags are piling up.

"At the Rainy Lake visitors center boat launch, we have a boardwalk that goes around the whole boat launch," explained Schoewe. "Because the water is rising so much, the boardwalk is not stable, so we had to sandbag that down to keep it from floating away."

Right now, every day seems to be worse than the day before with the water expected to crest around mid-June. "Last night, I drove to the Rainy Lake visitors center boat launch and there was three inches of water covering the parking lot, the whole parking lot. This morning there was eight inches," said Schoewe.

While Rainy Lake is the primary concern now, Kapatogama Lake is also under close watch as things are changing day-to-day. "We hate to discourage visitation," said Schoewe. "But right now, it’s an unsafe situation for docking your vessel and getting in the water."

If you’re planning to visit you’ll want to take a look at the Voyageur’s website and Facebook page which are being updated on Tuesdays and Fridays. Also, it's important to note that the surrounding communities are also fighting severe flooding that is impacting hundreds of homes and businesses.