(FOX 9) - The next couple of weeks will likely change many of our attitudes about our winter so far with plenty of mild temperatures likely to round out our January… what’s typically our coldest month of the year. But overall, according to the Accumulated Winter Season Severity Index (AWSSI), it’s been a harsh winter for some so far. 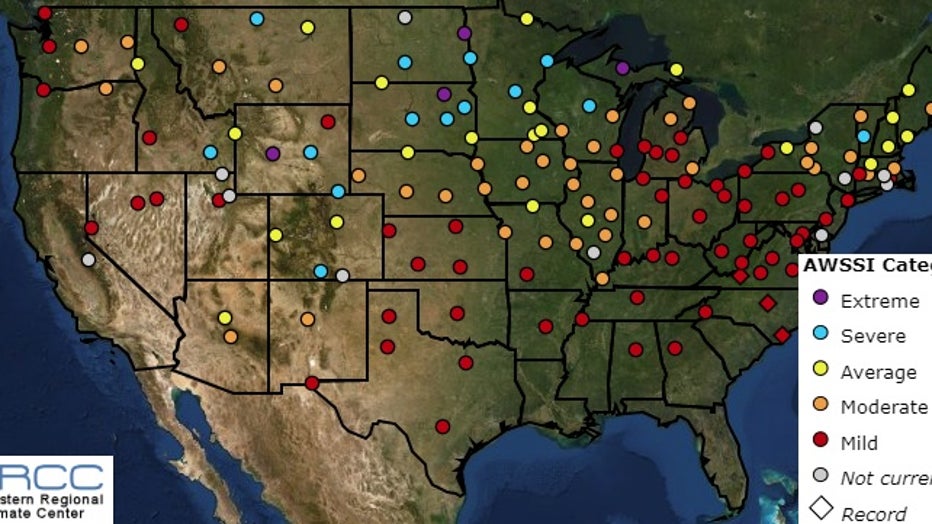 The AWSSI was developed to objectively quantify and describe the relative severity of the winter season in dozens of cities across the country.  Everyone has a little different idea of what they would classify as a harsh winter, so this scale was developed to be able to combat the relativism to weather, and make it comparable to other cities across the country. The index is based on a point scale with different winter conditions giving a different number of points. Daily, weekly, and monthly scores are calculated based on scores assigned to temperature, snowfall, and snow depth thresholds. While this is a much more efficient and uniform way to measure winter weather, it too has its limitations.  It doesn’t account for the wind or wind chill, which can play a HUGE roll in the overall feel of the winter season, and doesn’t address any precipitation other than snow, like freezing rain or sleet for example. These can also have HUGE impacts on the perception of the overall winter season. 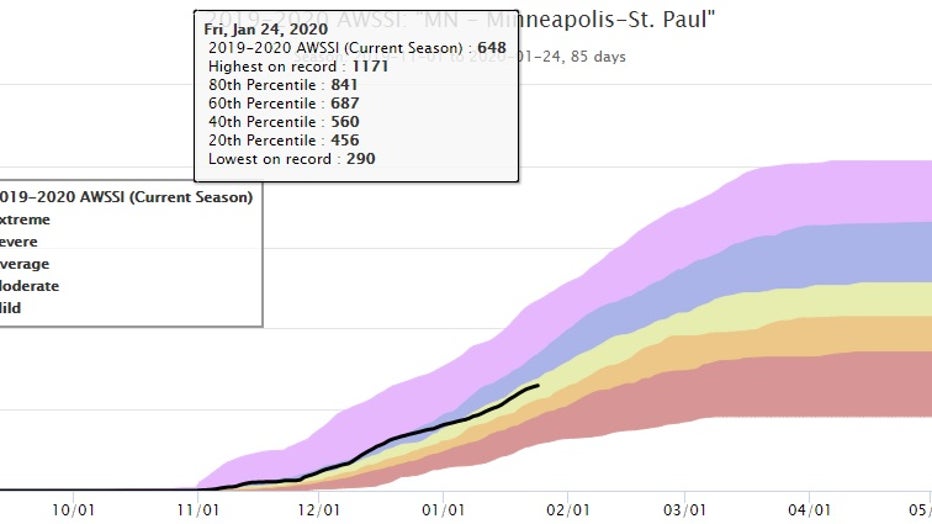 This is the graph that shows the current accumulated index amount for MSP as well as some key thresholds.

Those shortcomings aside, according to this index, the Twin Cities so far has experienced a pretty average season. While temperatures have been quite a bit warmer than normal, it was the lengthy cold snap in December, and the nearly 3 feet of snow we’ve seen so far that has kept this winter feeling pretty “typical”. For other areas of Minnesota like Duluth, St Cloud, and areas near Grand Forks, it’s been a severe to extreme winter so far.  This is mostly due to the incredible amount of snow that parts of the north have experienced this year. Duluth had one of their snowiest starts to winter on record and has now seen more than 70”. St Cloud & the Grand Forks area are also well above average in snow and have seen some pretty cold morning lows…. Although still shy of records in most cases.

It is a much different story though nationwide. While there are a few isolated locations that have seen an extreme winter, many areas, especially in the east, have seen a VERY mild winter. In fact parts of North Carolina, Virginia, and Georgia are experiences their record warmest dating back to when this index was first developed in the 1950s.