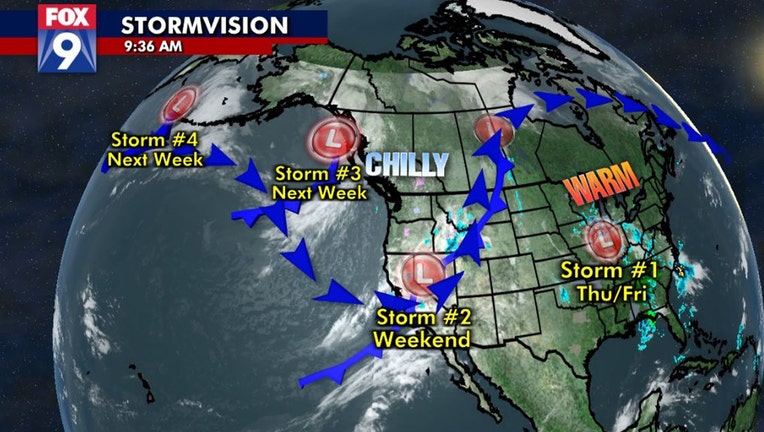 A large change in the overall North American weather pattern could bring some moisture in the next few days.  (FOX 9)

(FOX 9) - For the first time in weeks, a large change in the overall North American weather pattern will lead to more activity across the central United States. This doesn't necessarily mean more moisture in our neck of the woods, but it certainly gives us increased chances heading through the next few days.

The reason for the change all has to do with the jet stream. It's the river of air at the top of the atmosphere that separates colder air to the north of it from warmer air to the south. When that river changes locations significantly, it can lead to big changes both with temperatures and precipitation globally.

Well, that jet is pushing southward into the desert southwest. This opens the door to allow much cooler air into the western U.S. This trough, as it's called, forces storms farther instead of traveling through Canada and will bring plenty of moisture with them.

A large trough will dive into the western United States over the next couple of days leading to far cooler and unsettled conditions. Temperatures will hover 10-30 degrees below average in the west, but the exact opposite is likely for much of the east with near record warmth in spots.

The active pattern starts with our current upper-level low, hanging just to our southeast, giving Minnesota some light shower opportunities through early Friday. Then all eyes look to the west with three storms to quickly follow. One of those is already rolling on shore and likely to push through the Upper Midwest over the weekend. The next two are still near Alaska and will roll southward down the coast eventually pushing inland and into the center portions of North America. Now whether all, some or none of these storms actually bring Minnesota some rainfall is yet to be determined. But, it certainly gives us a far increased probability of some moisture in the days ahead.

But when there is a yin to anything on Earth, there's a yang. With the jet stream diving south across the west, that forces the jet stream to surge northward across the eastern half of North America. This gives the eastern half of the continent the exact opposite temperatures, with warmth and mugginess building from the Mississippi River valley and points eastward. This will keep temperatures well above average over the next few days here in Minnesota as well. With this pattern likely to continue for at least the next week, there are no sub-average temps in the forecast anytime soon, which means our first freeze is still nowhere in sight.