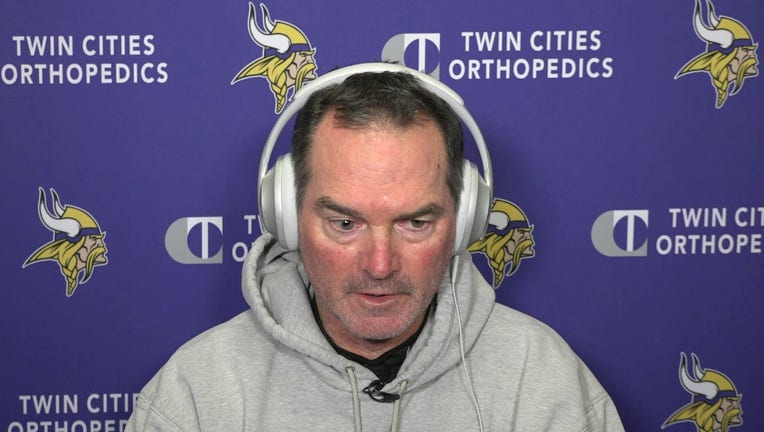 MINNEAPOLIS - For the fourth time in seven years, Minnesota Vikings coach Mike Zimmer spoke with reporters on Tuesday in a season-ending news conference after the team failed to reach the NFC Playoffs.

The talk into training camp was about contending for a Super Bowl. Zimmer and Rick Spielman got contract extensions going into 2021. Then it all, slowly but surely, fell apart. It started in the offseason with the departures of Linval Joseph, Everson Griffen, Stephen Weatherly, Xavier Rhodes, Trae Waynes, Mackensie Alexander and Andrew Sendejo in free agency.

The team’s only significant free agent signing, Michael Pierce, opted out of the season due to health concerns with the COVID-19 pandemic. Danielle Hunter went down before the season even started, suffering a herniated disc in his neck during training camp.

"I probably miscalculated some things going into the season when we lost all the guys that we lost the year before. We had a complete overhaul on defense," Zimmer said.

For just the second time under Zimmer, the Vikings finished under .500. With the season on the line at New Orleans in Week 17, that beat up defense allowed 583 yards and 52 points to the Saints. After, Zimmer called it the worst defense he’s ever had.

"We just have to play better defensively and try to stay healthy obviously," Zimmer said.

One thing he won’t blame the defensive woes on is having two coordinators share duties. His son, Adam Zimmer, and defensive line coach Andre Patterson shared coordinator duties. But the defense ultimately fell on Mike Zimmer, who called defensive plays for all 16 games.

"It was fine. I do a lot of that work over there anyways, so we didn’t play as good defensively as we wanted to. Those guys helped me an awful lot. I think it worked out fine," Zimmer said.

There will be changes heading into 2021. With the special teams unit mostly struggling throughout the season, Marwan Maalouf will not return as coach. Zimmer said his contract expired and will not be renewed.

Zimmer likely also has to find his sixth different offensive coordinator in six years. Gary Kubiak, 59, is leaning towards retirement. The offense failed at key moments in the season, but the Vikings finished fourth in total offense in the NFL.

Dalvin Cook finished second in rushing with 1,557 yards and 16 touchdowns. Kirk Cousins passed for more than 4,200 yards, a career-high 35 touchdowns and 13 interceptions. Adam Thielen and Justin Jefferson combined for more than 2,300 yards and 21 touchdowns. The Vikings were as explosive as they’ve ever been under Zimmer, largely due to their run game.

"I love Gary Kubiak, he’s an unbelievable person. Unbelievable coach, a great ear to me. I love sitting there talking to him, we’re both the same kind of guys. I think it’s always good to take some time and think about where you’re at," Zimmer said. "We’ll just see how that unfolds as we move forward. The best I’ve ever been around, terrific person, great coach. I loved having him."

The Vikings got off to a 1-5 start, fought to get back to 6-6 only to lose three straight to be eliminated from the playoffs before they could even think about contending for a Super Bowl. Player evaluations will start soon, and the front office has work to do before making 11 picks, including No. 14 overall, in the NFL Draft.

It's on Zimmer and Spielman to make sure there isn’t a repeat of 2020.

"We’re going to work like crazy on getting a couple areas fixed and come back with a vengeance," Zimmer said.