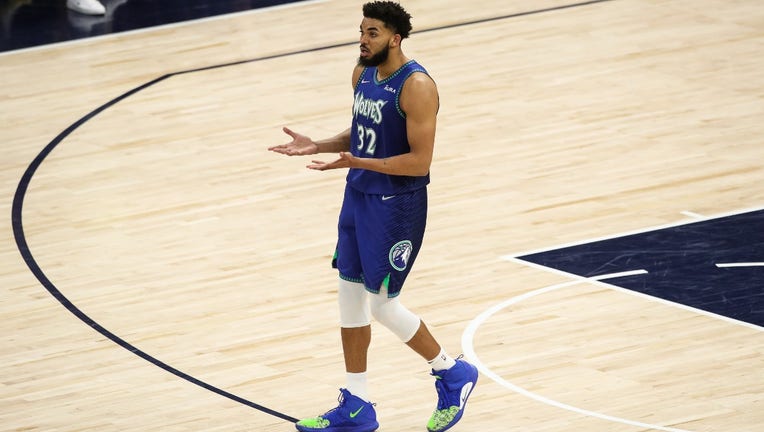 Karl-Anthony Towns #32 of the Minnesota Timberwolves reacts to his three-point basket against the Memphis Grizzlies in the fourth quarter during Game Three of the Western Conference First Round at Target Center on April 21, 2022 in Minneapolis, Minne ((Photo by David Berding/Getty Images))

MINNEAPOLIS - The Minnesota Timberwolves are down 2-1 to the Memphis Grizzlies after a 104-95 loss Thursday night at Target Center, and much of the blame for the meltdown is falling on Karl-Anthony Towns.

The Timberwolves had a 23-point lead with about three minutes to play in the third quarter. The Grizzlies then out-scored Minnesota 50-13. The Timberwolves scored 12 points in the fourth quarter. Now, they have to win Saturday night to avoid a potential elimination game next week in Memphis.

Towns, a former No. 1 overall pick in his seventh season, had arguably the worst game in his career. He took just four shots, scored eight points. He committed more fouls, five, than shot attempts and only had five rebounds in 33 minutes. After the game, Charles Barkley did not hold back on criticizing Towns.

Speaking with media post game, Towns cut off a reporter asking about him getting only four shots. His answer? "Next question." He then said he would decompress from the loss and pick up his teammates by having a glass of wine at home.

"I can’t believe his answers. Next question? This is two times in the last week in playoff situations you get more fouls than points and rebounds. Your answer is ‘Next question’ and ‘I’m going to drink me some wine?’ No, that’s bogus man. That’s total BS," Barkley said. "Dude, you were the No. 1 pick in the draft, you’re supposed to be a franchise player. You’ve got to play better, man. There’s never an excuse for a guy who’s and All-Star to get 6-5 and five fouls two times in a two-week period in must-win situations."

It’s a disturbing trend for Towns in playoff games. He fouled out, played just 24 minutes and was a non-factor in the play-in game against the Clippers. He struggled four years ago in the playoff loss to the Houston Rockets. He’s not demanding the ball in key spots, not taking over games and complains to officials after every call that doesn’t go his way.

Towns’ performance had fans furious on social media after, some even wanting him to be traded when the season ends.

Finch didn't use a timeout until Apple Valley native Tyus Jones buried a 3-pointer to give Memphis its first lead of the night, 86-85, with 6:48 to play in regulation. He was hoping the Timberwolves would play their way out of the mess, and it didn't work.

"I burned a lot early, so I was hoping that we would be able to kind of get to the fourth a little bit deeper," Finch said after the game.

"I picked Minnesota to win this series because they’ve got talent, but they got no brains whatsoever. They got a coach who last game let his two best players get four fouls in the first half. Tonight, he let a 21-0 run in a playoff game and did not call a timeout," Barkley said. "They scored 21 straight points, and this dude did not call one single timeout. It’s just embarrassing. If I’m A-Rod, this is unacceptable. That’s ridiculous."

We’ll find out Saturday night if the Timberwolves can bounce back on their home court, or if Thursday night was the beginning of the end for the 2021-22 season.