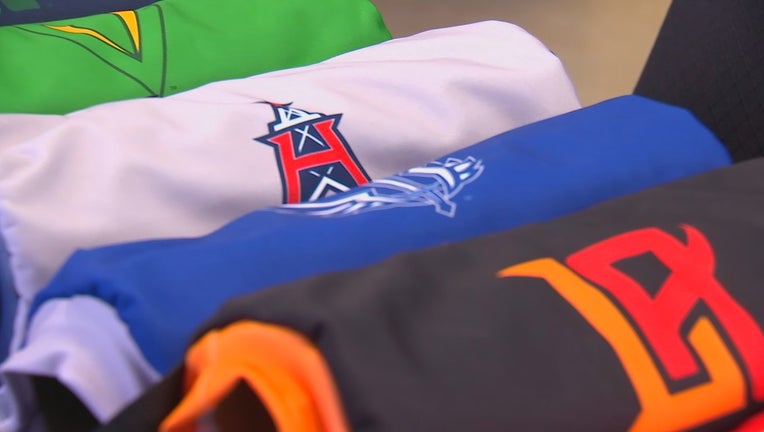 WSI Sportswear owner Joel Wiens says his company has been pumping out gear for the XFL over the last couple months ahead of the season kickoff.. (FOX 9)

EAGAN, Minn. (FOX 9) - We are a few days from a thrilling Super Bowl but another football season is about to kickoff.

The brand new XFL will launch its inaugural season this weekend with a pair of games that will air on FOX. With the season start coming deep into the winter, the XFL has turned to a Minnesota company to handle its cold-weather outdoor gear.

XFL turns to Eagan, Minn. company for its cold-weather gear ahead of season kickoff

We are a few days from a thrilling Super Bowl but another football season is about to kickoff.

"They really rolled out a lot of cool designs and I think that was one of their big things," said WSI Sportswear owner Joel Wiens. "The XFL, new designs, new ideas. I think that is part of the excitement behind it."

Wiens says he is fired up to be part of the launch of the nation’s new pro football league.

"We're printing the Houston Roughnecks cold weather tops right now," said Wiens. "It goes through this machine that prints fabric and it comes out from there and sew it up."

WSI landed the XFL's cold-weather gear contract, which is WSI’s largest deal in its 30-year history. The Eagan-based firm, known for keeping athletes warm in freezing conditions with its uber-thin, Heatr technology, spent the last month churning out hand muffs, undergarments, and other necessities for playing football outdoors in places like New York and Seattle in February.

"It’s kind of exciting to see it come together from scratch," said Wiens.

It is actually the second attempt at the XFL for owner Vince McMahon, the wildly successful professional wrestling king who first took a run at creating an NFL alternative about 20 years ago.

This time around, McMahon and his crew developed an eight-team league with some new rules that will differ significantly from the Vikings games fans are accustomed to watching on fall Sundays.

First, kickoffs have been altered to make them safer while encouraging big returns.

Extra points are gone. Instead, offensive teams will have to choose whether to go for one, two, or three points on a single play from the two, five, or ten-yard lines respectively. Finally, overtime becomes a round-robin offensive showcase.

Weins’ company isn’t new to the biggest of sports stages. Their gear was well represented at this year’s Super Bowl as they also have cooling performance fabric. Both Chiefs coach Andy Reid and MVP Pat Mahomes said to be big fans of WSI. Being a part of something so new though is a little different.

The company was sent the never-before-seen XFL team logos and color schemes at Christmas with the goal of having everything printed and sewn by opening weekend February 8 and 9.

So far, they’ve produced thousands of pieces. The hope is there is a lot more to come in the years ahead.

"I think they got some funding for a few years," added Weins. "The plan is in place and I think McMahon usually knows how to make things win. Don’t think he’d take another crack at this if he didn’t see some opportunity."

The league kicks off its ten-week season on Saturday at 4 p.m. with a game on FOX 9. Another follows on our air Sunday afternoon at 1 p.m.

The upstart league doesn't have a Minnesota team at this point; the closest geographically is St. Louis. However, if you want a rooting interest, a couple former Gophers is on the roster of the DC Defenders: Defensive back Jalen Myrick and linebacker Jonathan Celestin.