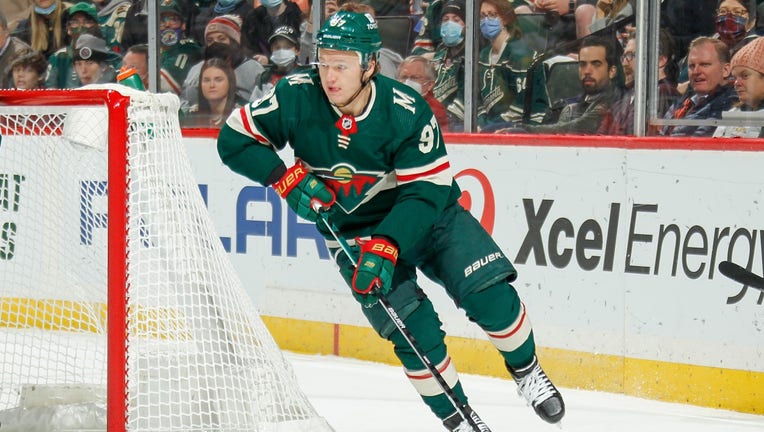 Kirill Kaprizov #97 of the Minnesota Wild skates with the puck against the Montreal Canadiens during the game at the Xcel Energy Center on January 24, 2022 in Saint Paul, Minnesota.  ((Photo by Bruce Kluckhohn/NHLI via Getty Images))

MINNEAPOLIS - Kirill Kaprizov has barely played one full season’s worth of games in the NHL, but he’s already emerged as one of the top players in pro hockey.

Last week, Kaprizov became the fastest player in Minnesota Wild franchise history to 100 career points, getting there in 92 games. That matches Edmonton Oilers’ star Connor McDavid, and is behind only Alex Ovechkin (77), Sidney Crosby (80) and Evgeni Malkin (89), three of the biggest names in hockey.

Kaprizov can add one more accolade to his already impressive list later this week: NHL All-Star. He’ll be among the best players in hockey in Las Vegas. At practice on Tuesday, Kaprizov was still trying to wrap his head around it all.

His All-Star weekend festivities won't be limited to just the game. The NHL announced Thursday he's been selected to the Breakaway Challenge as part of the All-Star Weekend.

Kaprizov’s skill and playmaking has never been questioned. He won the Calder Trophy last year, which goes to the top rookie in the NHL. In 40 games this year, Kaprizov has 19 goals. His 34 assists are ninth in the NHL.

In 94 career games, Kaprizov has 46 goals and 58 assists, good for 104 points. Most importantly to Kaprizov, the Wild is among the hottest teams in the NHL. The Wild beat the Chicago Blackhawks 5-0 Wednesday night to enter the All-Star break 9-0-1 in their last 10 games. They're on a 10-game point streak, have won six straight games and have won five of their last six games in regulation.

The Wild has not lost in regulation since a 6-4 defeat to the St. Louis Blues on New Year’s Day at the NHL Winter Classic.

Kevin Fiala scored in Wednesday's win, and has the longest active point streak in the NHL at 12 games. That also ties Mikael Granlund for the longest in franchise history. Matt Boldy had an assist on Fiala's goal and became the first Wild player in franchise history to record 10 points in his first 10 games. Cam Talbot, an All-Star alongside Kaprizov, recorded his first shutout of the season Wednesday night before heading to Vegas. Talbot will be participating in the Save Streak competition this weekend, along with seven other goalies.

The Wild is in the No. 3 spot in the Western Conference exactly halfway through the season with 59 points at a 28-10-3 record in 51 games. They're one point behind the Nashville Predators for the No. 2 spot. General Manager Bill Guerin made bold moves in the offseason, buying out the contracts of Ryan Suter and Zach Parise to opt for younger talent.

"The team is obviously playing well, we’ve got really good chemistry. I think we can get even better, I think we’ve got a high ceiling. We need to develop, continue to get better, continue to build chemistry and get better," Kaprizov said. "Obviously things are great right now and I’m happy about that and we’re winning games and we’re playing well. But I think we can get even better. I’m really excited about what we can do with this team."

The question remaining is if the Wild can take the early success and sustain it in the postseason. The Wild has not won a playoff series since beating the St. Louis Blues 4-2 in the 2015 Stanley Cup Playoffs.