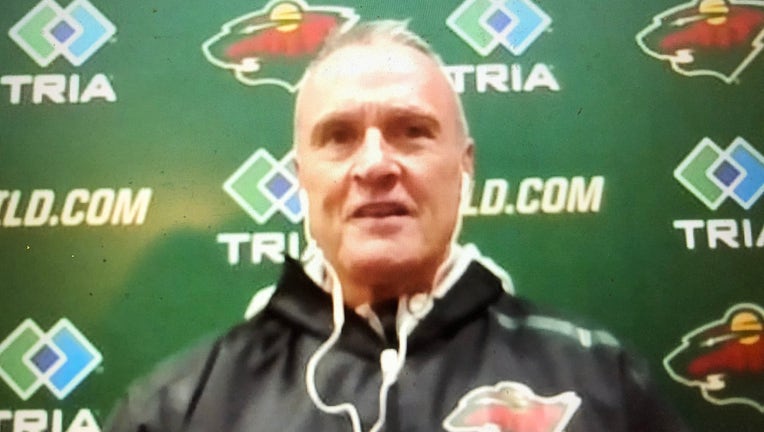 Wild coach Dean Evason talked Wednesday about summer camp and the team's scrimmage on Thursday before heading to Edmonton.

MINNEAPOLIS - Don’t be surprised if things get a little intense at TRIA Rink on Thursday as the Minnesota Wild has one of its final scrimmages before leaving for Edmonton.

The team practiced Wednesday morning, and had a special teams scrimmage to change things up. They worked on power play, penalty kill, 6-on-5, 4-on-4 and even 5-on-3. They have about two weeks to be ready for anything as they face the Vancover Canucks in Game 1 of a best-of-five series on Aug. 2.

Dean Evason’s daily challenge is to mix things up at practice to keep everybody fresh.

“I think it’s a nice variation from just practicing every day. We’ve tried to vary each day and try to give some different looks and some different stuff. It’s hard to keep anybody’s attention but it’s hard to do the same thing every day,” Evason said. “We really enjoyed it, I thought we got a lot out of it.”

Thursday’s scrimmage will be a full-go, with two teams playing three 15-minute periods.

Evason was asked if the thinks the players are getting sick of playing against each other after nearly two weeks of training camp. He hopes so.

“It’s been fun. It’s been weird times and it’s fun to be back with the guys and start skating, start competing again. I think we had a high pace right from the get-go, so it’s been really good so far,” center Joel Eriksson-Ek said. “We’ve got to compete with each other, make each other work as hard as we can and push each other to get better every day. Get back to that compete level we had.”

The team departs for the Edmonton bubble and the unknown on Sunday. They don’t know what to expect when they get there, other than a four-day mandatory quarantine in their individual hotel rooms.

Evason and GM Bill Guerin did meet with their captains and team leaders to figure out a dress code in Edmonton. To make everyone’s life a little easier with packing, suits are out. Zach Parise said Tuesday they’ve agreed on three team-issued polo shirts, and dress pants to wear on game days.

Evason likes it, and says it’s up to the players to figure it out.

“As long as they look good and presentable, their thought process of wearing the team shirts is a wonderful idea. It says team and hopefully we can carry that out on the ice,” Evason said.

The Wild will scrimmage at 11 a.m. Thursday at TRIA Rink. It’s closed the public, but will be broadcast on the team’s YouTube channel and on KFAN Plus.