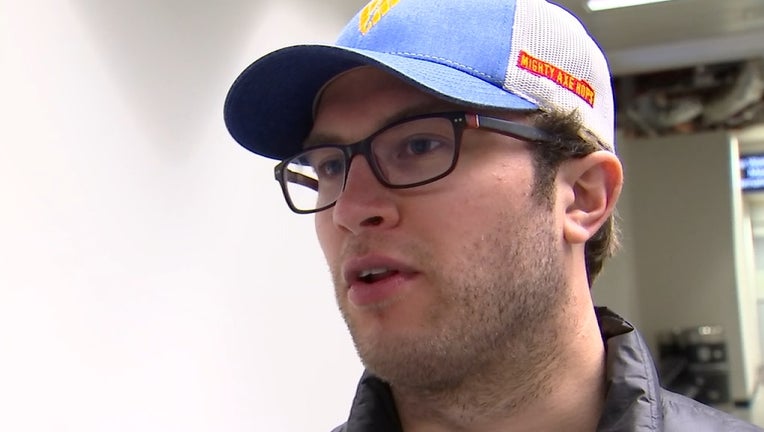 MINNEAPOLIS - Alex Stalock has answered the call every time Devan Dubnyk couldn’t be in net for the Minnesota Wild, and now the No. 2 goaltender has been nominated for the NHL’s Bill Masterton Memorial Trophy.

The award is presented annually to the player who best exemplifies perseverance, sportsmanship and dedication to hockey. Stalock, 32, was 20-11-4 with a 2.67 goals against average and .910 save percentage, posting four shutouts in 36 starts for the Wild this season.

“Any time you’re playing with a lot on the table is a ton of fun as an athlete. I wanted to step up and fill some pretty big shoes that he has had here in Minnesota since Day 1 since he’s gotten here. I just wanted to work as hard as I can and get that bench, that locker room, a feeling of we’re OK back there,” Stalock said via Zoom on Monday.

He became the fifth goaltender in franchise history to record at least 20 wins in a season. Stalock set career highs in games played (38), games started (36), wins (20), minutes played (2,177), shots against (1,082) and saves (985). Stalock is the seventh different Minnesota-born goalie to reach 20 wins in a season.

The Bill Masterton Memorial Trophy is voted on by the Professional Hockey Writers’ Association. The award was first presented in 1968 to honor Masterton, who played for the Minnesota North Stars and died on Jan. 15, 1968, due to head injuries suffered during a game.

Stalock stepped in for the Wild when Dubnyk had to take time away from the team due to a family medical issue.

“Any time as an athlete, you want to be as competitive as you can, the best you can be. It’s a goal to play, you want to play as many minutes, as many games as you can. When you’re wired like an athlete that wants to be competitive and wants to win, obviously any time you’re in the net it’s that much better,” Stalock said. “We played great when I was in there and it made it that much better to go in and have success playing behind that group.”

In 151 career games and 123 starts, Stalock is 61-49-18 with a 2.61 goals against average, a .909 save percentage and nine shutouts. It’s his second time being nominated for the award, as he was nominated following the 2013-14 season with the San Jose Sharks. He recovered from a career-threatening leg injury during his time with the Sharks.

Stalock would be the third Wild player to win the award. Josh Harding was named the recipient in 2013, and Dubnyk earned it in 2015.

“Obviously it’s pretty special. Any time you’re nominated for an award, it’s a nice feeling. You look at this award as it’s kind of a team award and you had to give it to one guy. It’s an honor to take it, but it’s a team award,” Stalock said.