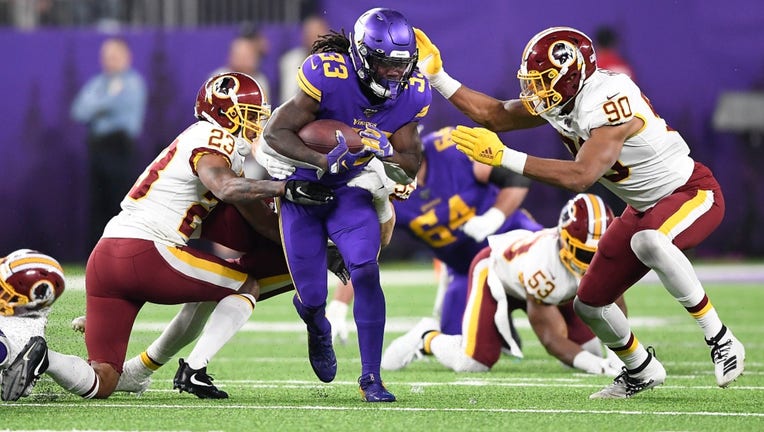 Running back Dalvin Cook #33 of the Minnesota Vikings runs against the defense of Montez Sweat #90 and Quinton Dunbar #23 of the Washington Redskins in the game at U.S. Bank Stadium on October 24, 2019 in Minneapolis, Minnesota. ( (Photo by Hannah Foslien/Getty Images) )

MINNEAPOLIS - We’re less than a month away from the start of NFL free agency, but two of the biggest questions on the Minnesota Vikings roster are under contract for the 2020 season.

What the Vikings choose to do with the futures of Kirk Cousins and Dalvin Cook could be a signal of where the franchise thinks it’s headed for the next several years. Mike Zimmer is entering his seventh season Minnesota, and the Vikings have been to the NFC Playoffs three times.

Can Kirk Cousins take the next step?

Cousins won his first career playoff game this past season at New Orleans, hitting Kyle Rudolph for a walk-off touchdown.

Two years ago, Cousins was an unrestricted free agent looking for a big pay day. The Vikings were among his top suitors, and ultimately offered him a three-year, $84 million fully-guaranteed contract. With every dollar assured in a league that rarely does that with its biggest names, it’s what ultimately brought Cousins to Minnesota after a dinner and lengthy discussion with team officials at The Capitol Grille in downtown Minneapolis.

The Vikings needed a quarterback after letting Case Keenum walk in free agency. Keenum led the Vikings to a 13-3 season, and one game away from playing a virtual home game for the Super Bowl.

In stepped Cousins, who threw for 4,298 yards and 30 touchdowns with just 10 interceptions in his first season with the Vikings. But it didn’t translate to wins. The Vikings finished 8-7-1, and with a chance to solidify a playoff spot, got dominated by the Chicago Bears in the 2018 regular season finale.

Fast forward to this past season. Cousins threw for 3,603 yards, 26 touchdowns and just six interceptions. He finished 16th in the NFL in passing yards, and sixth in touchdown. But the Vikings went just 2-4 against the NFC North, getting swept by both the Packers and the Bears. Cousins had to battle the narrative most of last season, and still continues to do so, that struggles when the Vikings are in the national spotlight or playing against an above .500 team. At one point last season, Cousins had a 5-27 record for his career against teams with a winning record. That includes a 1-8 mark with the Vikings.

The Vikings had just two wins last season against teams that finished above .500 – The Philadelphia Eagles in Week 6 and the New Orleans Saints in the Wild Card Playoffs.

Now with the 2020 season ahead, the Vikings have a decision to make with Cousins. He’s due a guaranteed $29.5 million in base salary, with a $31 million cap hit. Do the Vikings believe Cousins can take them to the next level, which would be winning the NFC North and competing for a Super Bowl? If they do, extension talks should be in the works. Cousins has shown in the past he’ll test free agency. If they don’t think he’s that guy, things get very interesting for the Vikings this off-season. Do they draft a quarterback? Do they try to find a team that will take on his salary? Stay tuned.

What do the Vikings do with Dalvin Cook?

The Vikings are in somewhat of a tough spot with Dalvin Cook. The 2017 second-round draft choice is in the final year of his rookie contract, and is underpaid with a $1.3 million base salary this upcoming season. He’ll give the Vikings a $2 million cap hit this season, on a team with limited cap space that’s also hoping to retain several veterans on defense.

Cook has had all of his first three seasons impacted by injury. He played four games as a rookie before suffering a season-ending torn ACL. Two years ago, he missed five games with a nagging hamstring injury. This past season, he missed two games and half of two others with a chest and/or shoulder injury.

When Cook has been healthy, he’s proven to be one of the better running backs in the NFL. He led the league in rushing after eight games this past season, and finished 10th with 1,135 yards. His 13 rushing touchdowns were fourth in the NFL.

Cook became a primary target for Cousins in the passing game when Adam Thielen went down with a hamstring injury. Cook was Minnesota’s second-leading receiver with 53 catches for 519 yards. Cook, when healthy, became a focal point for the Vikings’ offense. So will he get paid as such in a league that has diminished the value for running backs? Time will tell, but it will be interesting to see if the Vikings invest in Cook, risk letting him enter free agency or see what the trade market might hold for him.

There’s a lot of players on the roster who want a lot of money, and the Vikings can’t pay them all. Who the front office decides to keep will be telling in where they think the team can go in 2020 and beyond.