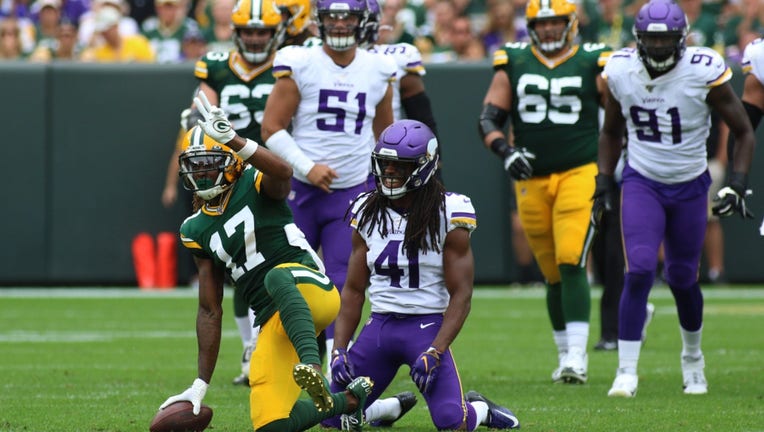 Green Bay Packers wide receiver Davante Adams (17) celebrates a first down during a game between the Green Bay Packers and the Minnesota Vikings on September 15, 2019 at Lambeau Field in Green Bay, WI. (Photo by Larry Radloff/Icon Sportswire via Gett ((Photo by Larry Radloff/Icon Sportswire via Getty Images))

EAGAN - Like most NFL teams, the Minnesota Vikings have a 24-hour rule when it comes to reacting to wins and losses.

Come in the day after, watch tape, learn from mistakes and move onto the next opponent. It was easier to do it after beating the Atlanta Falcons 28-12 in Week 1. Monday might have been a more humbling film session after the Vikings let a winnable NFC North road test slip away in a 21-16 loss at Green Bay.

The Vikings fought back after getting down 21-0 early.

“We’ve got to start faster. At the end of the day, we lost. If we start faster, we’ve got a better chance. That’s all that matters. We already know we’re going to fight and we’re going to play hard, we just have to keep them out of the end zone,” safety Harrison Smith said.

Green Bay started last Sunday’s game with touchdowns on each of its first three possessions. Minnesota’s first two possessions ended with a Dan Bailey missed 47-yard field goal, and a Kirk Cousins sack and fumble that the Packers recovered and turned into seven points.

Small mistakes on defense got Aaron Rodgers and the Packers in the end zone three times before the Vikings could get their footing.

“It’s a matter of us really locking into what it is we’re trying to do and making sure we don’t beat ourselves,” Defensive Coordinator George Edwards said.

Defensive end Everson Griffen said Wednesday it comes down to limiting big plays, whether it’s Rodgers or this week’s opposing quarterback, Derek Carr. The Packers ran 17 plays for 167 yards and two touchdowns in the first quarter against the Vikings.

“We have to stop the explosive plays straight out the gates. That’s a big momentum swing for them. We do have to start faster. When we hit the field, it’s very important,” Griffen said.

Last year’s 29-29 tie at Green Bay in Week 2 had emotional swings each way. The Vikings got down big early, forced overtime but were forced to settle for the tie after a pair of missed field goals. Daniel Carlson was cut the following Monday, and he’ll be back at U.S. Bank Stadium this Sunday with the Raiders.

Vikings tight end Kyle Rudolph talked Wednesday about the importance of not letting one loss become a skid. It’s still early in the season, and there’s plenty of time to get back on track. After the tie at Green Bay last season, the Vikings inexplicably lost 27-6 at home to the Buffalo Bills, then lost on the road to the L.A. Rams.

“It’s extremely important. I think back to last year when we let an emotional game at Green Bay carry over into two more losses, home against Buffalo and then on the road against the Rams. We’ve got to move on from last week, we have moved on from last week,” Rudolph said.

Stefon Diggs said over the course of a 16-game season, you’re going to hit adversity and probably more than once. His only catch from Cousins at Green Bay went for a 45-yard touchdown.

It’s only Week 3, but it’s already a pivotal week for the Vikings. They’re 8.5-point favorites at home against the Raiders, but a Week 4 trip to Soldier Field to face the Chicago Bears looms. It’s why learning, moving on and stopping a skid before it can start is so crucial.

Zimmer is 2-3 in his career at Chicago, including a 25-20 loss last season. But what matters right now is the Oakland Raiders on Sunday.

“There’s 14 more games left. What we do in the next 14 games will determine what we do, whether it’s myself or Kirk or the defense, receivers, whatever it is. This is a week-to-week proposition, trying to overcome and you get back to work on the next week so that’s what we’re going to do,” Zimmer said.