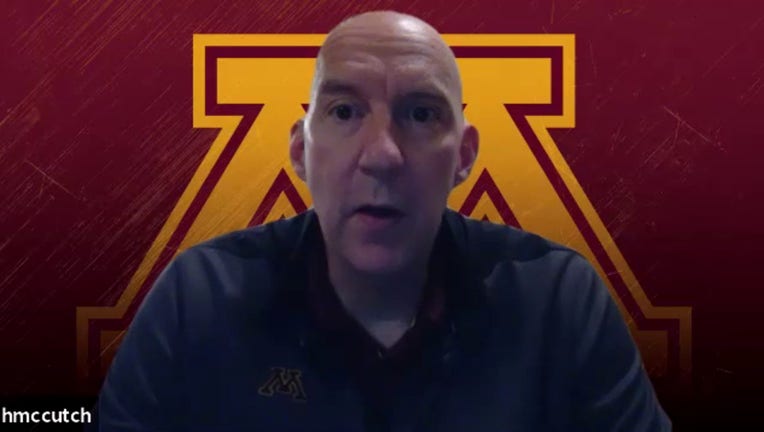 Gophers volleyball coach Hugh McCutcheon talked Friday about having the No. 1 overall recruiting class in college volleyball for the 2020 season.

MINNEAPOLIS - Hugh McCutcheon doesn’t put a lot of stock into rankings, he prefers to have it proved on the court and in December in the NCAA Tournament.

But even he can appreciate the news late last week that coming off the Gophers volleyball team’s third run to the Final Four in five seasons, Minnesota should be a formidable opponent if the 2020 season happens as planned. The Gophers return 11 letter-winners from a team that finished 27-6, including a 17-3 mark in the Big Ten, and reached the national semifinals.

For the first time as he enters his ninth season as head coach, McCutcheon as the No. 1-ranked recruiting class in the nation for 2020, according to Volleyballmag.com. It’s the second time in program history that’s happened.

“The rankings are nice, but they’re someone else’s opinion of what we’re doing. I think what matters most is that we really like this class. We think they’re a great group of young women and really talented obviously on the volleyball court,” McCutcheon said Friday via Zoom. “But they get it done in the classroom and they’re people of character, which is what we’re looking for in the recruiting process.”

Add those three to a roster that includes All-Americans Regan Pittman and Stephanie Samedy, and All-Big Ten pick CC McGraw, and it’s a combination that has the potential for a dominant season.

“Yeah we’ll have some good practices, I would imagine there would be some good competition in the gym, which is important for us. It was a great team before this and I thought the first six weeks we had, even though it was really limited in terms of the training opportunities that we had, I thought it was great,” McCutcheon said. “As good a beginning to our spring that we’ve ever had.”

McCutcheon and the Gophers might be at the top of the 2020 recruiting rankings, but they’re not alone in the Big Ten. Wisconsin has the No. 3 class, Michigan is ranked No. 6, Ohio State is at No. 8 and Nebraska is at No. 10.

That’s five Big Ten teams in the top 10 in the country.

“That’s why the rankings are great, but pretty speculative. There’s a lot of good players and a lot of good coaching in our league, that’s what makes Big Ten volleyball so incredible to be a part of,” McCutcheon said. “The talent is deep, the crowds are amazing, the TV coverage, the whole thing. It’s a really wonderful thing to be a part of.”

The challenge now is the unknown and the uncertainty of college sports due to the Coronavirus pandemic. The Gophers were six weeks into their spring program when the NCAA canceled all team activities due to Covid-10.

McCutcheon said they hadn’t gotten to the point in their training where they were together 20 hours per week, and never got a chance to scrimmage. Like every other college sport, they don’t know if or when they’ll have a season.

They can’t play volleyball together, but they’re staying in touch whether it’s through text messaging or video chats. They’re also finishing up finals online, with campus closed.

“I think our student athletes have done a remarkable job actually, just managing whatever the new normal is,” McCutcheon said. “Just also getting it done in the classroom, staying connected as a group, it just really feels like there’s a lot of good things they’re doing to get through it.”