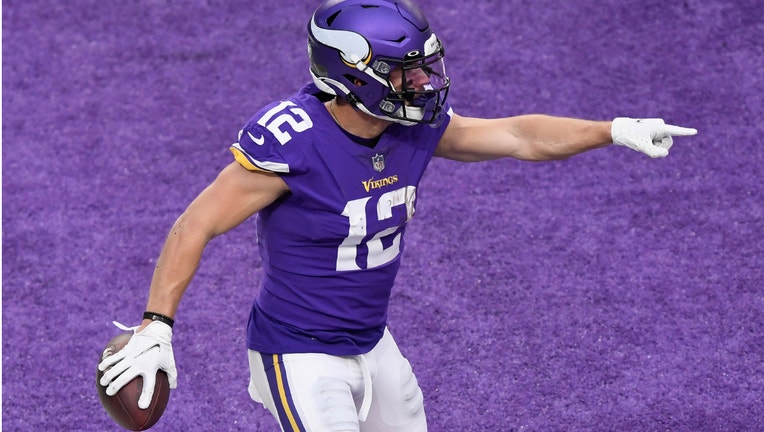 Chad Beebe #12 of the Minnesota Vikings celebrates a touchdown against the Carolina Panthers during the fourth quarter of the game at U.S. Bank Stadium on November 29, 2020 in Minneapolis, Minnesota. ((Photo by Hannah Foslien/Getty Images))

MINNEAPOLIS - Chad Beebe hasn’t had much of anything easy in his two-plus NFL seasons with the Minnesota Vikings.

That’s why he wasn’t going to let a muffed punt in a big spot in the fourth quarter Sunday keep him down, especially if he got another chance. Beebe caught a 10-yard touchdown pass from Kirk Cousins with 46 seconds left in regulation. It ended up being the game-winning score as the Vikings beat the Carolina Panthers 28-27 to keep themselves in the NFC Playoff conversation with five regular season games remaining.

“I had a dropped punt, it’s funny though because things didn’t really get down. I came to the sideline and everybody was positive and it’s just having that never give up attitude,” Beebe said after the win. “Our entire team kind of felt that way, we had plenty of time to drive down and score and that’s exactly what we did.”

The muffed punt couldn’t have come at a worse time for the Vikings. The defense had just gotten a stop after Minnesota cut its deficit to 24-21. The turnover gave the Panthers the ball inside the Minnesota 10-yard line. The defense kept Carolina out of the end zone, forcing a field goal.

The Vikings still had a chance, trailing 27-21 with 1:51 to play despite another special teams error. But Mike Zimmer wasn’t going to take Beebe out of the game. He needed him on offense, with Adam Thielen quarantined on the COVID-19 list and watching the game at his home.

“Everyone that’s been in this situation, we’ve all made mistakes. It’s not one of those kind of things where you make a mistake, you’re done. You make a mistake, you forget about it, you move on and go about your business,” Zimmer said. “When you play sports and do the things we do, everybody is going to make a mistake here and there. He’s not the only one that’s ever muffed a punt in his life.”

Beebe put his mistake in the past, and made a big play with the Vikings’ season potentially on the line. He was open over the middle, and Cousins hit him for a touchdown on a drive that required seven plays and needed just 65 seconds.

“I just ran the route like he was going to throw it to me and sure enough he did. It was a great pass. I think the relief came after the dropped punt, just trying to make up for what we thought was lost,” Beebe said. “At the end of the day on punt return, it’s my job to catch the ball and I didn’t do my job. I definitely felt like it was personal.”

His road hasn’t been easy. Undrafted out of college, Beebe made the Vikings’ roster as a rookie in 2018. He played in three games, making four catches and playing primarily special teams. He missed five games with a hamstring injury.

Beebe played just three games last season and was placed on injured reserve in September 2019 with torn ligaments in his ankle. The silver lining Sunday was his adversity came on the field, and he responded with the game-winning catch.

“At the end of the day things aren’t always going to go the way you want it to. But in life you’re always going to have a chance to make up for it. Never give up attitude,” Beebe said.