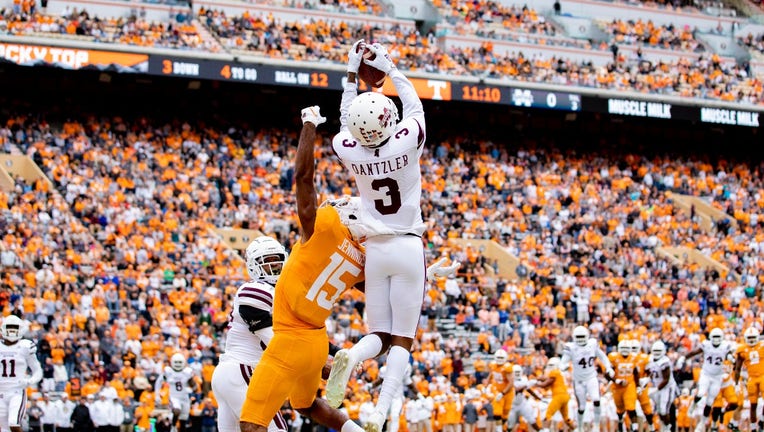 Cameron Dantzler #3 of the Mississippi State Bulldogs intercepts a pass intended for Jauan Jennings #15 of the Tennessee Volunteers during the first half of a game at Neyland Stadium on October 12, 2019 in Knoxville, Tennessee. ((Photo by Carmen Mandato/Getty Images))

MINNEAPOLIS - Cameron Dantzler had a feeling he might be getting a phone call from the Minnesota Vikings in the NFL Draft last Friday night.

The Vikings needed to make additions to the secondary with Xavier Rhodes, Trae Waynes and Mackensie Alexander no longer with the team. That process started with trading back in the first round to the No. 31 pick and taking TCU’s Jeff Gladney. They needed more, and the next step was getting Dantzler with the No. 89 pick in the third round.

It was a busy draft weekend for the Vikings front office as the team brought in a record 15 draft picks.

“It was a great feeling. I feel like Minnesota was in the top three of who was going to draft me tonight. I’m just glad to be a Minnesota Viking. I’m just going to come in and do my part,” Dantzler said after being selected.

He’s tall for a defensive back at 6-2, something the Vikings’ front office kept in mind as they were drafting secondary players.

“He's a young kid that's still maturing and growing into his body, but he has such unique length. The athleticism that goes along with that length gives him a chance to be a really good corner in this league,” Spielman said.

If one thing is certain, Dantzler doesn’t lack confidence. His first collegiate interception came off now Baltimore Ravens star Lamar Jackson, who was the NFL’s Most Valuable Player last season. He’s a stingy, physical defensive back who allowed just one touchdown combined in his last two seasons.

He was given the nickname “The Needle” in college, and his explanation says it all.

“I was always skinny, but when I hit you it hurt so they gave me that nickname,” Dantzler said.

He started eight games for Mississippi State last year, making 40 tackles with two for a loss. He tied for the team lead with two interceptions and eight pass break-ups.

Dantzler made a name for himself against LSU last season, limiting star receiver Ja’Marr Chase to five catches for just 48 yards.

“LSU, that football team was the litmus test I think,” Spielman said. “One of their top receivers down there and how he stood up to them and rose to that challenge, he's another guy that I think plays with a little bit of a chip on his shoulder and wants to go out and prove that he can go out there and be a corner that's going to compete against the best, and he's showing that.”

One of the concerns about Dantzler through the NFL Draft process was the NFL Combine. He was battling a quad injury and ran a 4.64 40-yard dash. He ran another 40 on a separate day with his agent and scouts watching, and ran a 4.38.

“I know that I’m faster than a 4.6. I just wanted to show that at the next level, I can keep up with some of the top receivers in the league, run toe to toe with them,” Dantzler said.

Dantzler emulates his game from Richard Sherman and Jalen Ramsey, two players who have never shied away from their ability on the field.

“You’ve got to be confident and have that swagger, and those guys have that confidence and swagger at the cornerback position,” Dantzler said.

Dantzler is excited to play in a Zimmer defense. He knows Zimmer loves to develop cornerbacks, and he wants to be the next great one for the Vikings. He’ll have rookie help with Gladney, and veterans in the secondary like Harrison Smith and Anthony Harris.

He says being a tall defensive back makes him a perfect fit for the Vikings, and Minnesota was one of the three teams he thought would be calling him in the NFL Draft.

“He (Zimmer) likes his cornerbacks big, fast and nasty so I just want to do whatever I can to contribute to the team and help bring a Super Bowl to our organization,” Dantzler said.