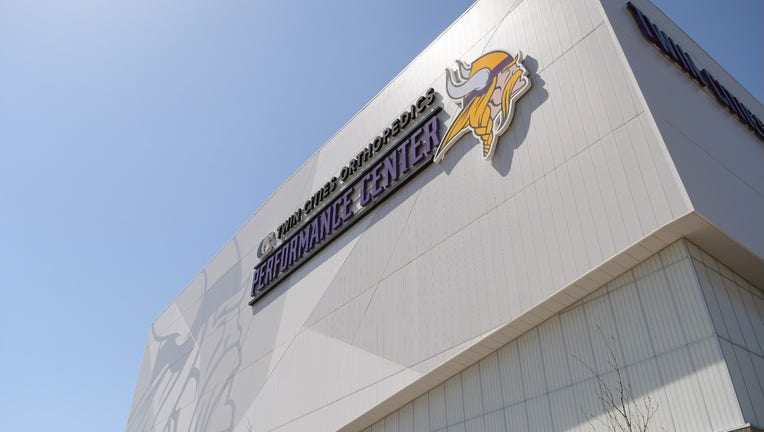 A general exterior view of the Minnesota Vikings new headquarters and training facility on May 4, 2018 at Vikings Rookie Minicamp at TCO Performance Center in Eagan, MN. ((Photo by Nick Wosika/Icon Sportswire via Getty Images))

MINNEAPOLIS - In what could be seen as progress in the NFL getting closer to resuming normalcy, commissioner Roger Goodell last Friday said teams in cities that have lifted Covid-19 restrictions can reopen their facilities for certain essential staff on Tuesday.

Teams that do reopen their facilities must adhere to state and local guidelines, mandated by the Coronavirus pandemic. All 32 NFL teams are in the midst of virtual offseason programs, and team gatherings of 10 more in any scenario are strictly prohibited.

The Minnesota Vikings are not one of the teams opening their practice facility. Jeff Anderson, the team’s vice president for strategic and corporate communications, said TCO Performance Center in Eagan will remain closed and staff will continue to work remotely, just like they did for the virtual NFL Draft and are doing for the offseason program. The team has held rookie minicamp virtually through video conferencing, and players are getting sent clips for offensive and defensive installs to work on their own individually.

“We have submitted a comprehensive plan to the NFL outlining the team’s procedures to return to work in a methodical manner that emphasizes the health and safety of our players, coaches, staff and broader community. At this time, front office staff will continue to work remotely while we further evaluate when to begin re-introducing employees to the facility in the near future,” Anderson said in a statement. “As we have throughout this situation, we will follow any future guidelines set by Governor Walz and state and local public health officials and adhere to the policies directed by the NFL.”

The NFL closed all team facilities back in March due to the Covid-19 pandemic. Teams that due open their facilities this week must have no more than 50 percent of their staff on site, and no more than 75 people in the building. Coaches and players are not allowed at facilities to maintain competitive balance across the NFL. Only players going through medical treatment or rehab are allowed inside team facilities.

Vikings wide receiver Adam Thielen, speaking to reporters Tuesday via Zoom, is willing to wait until medical professionals deem it's OK to get back to work in a team capacity.

May is typically the time of year teams get together for organized team activities, and mandatory mini camp follows in June before teams take time off prior to training camp in late July and early August. At this time, it’s not clear when team facilities will fully reopen.

The Vikings released their preseason schedule last Friday, which includes home games at U.S. Bank Stadium against the Houston Texans and Seattle Seahawks. The Vikings are set to host the Green Bay Packers in Week 1, and it remains to be seen if fans will be allowed in the building.