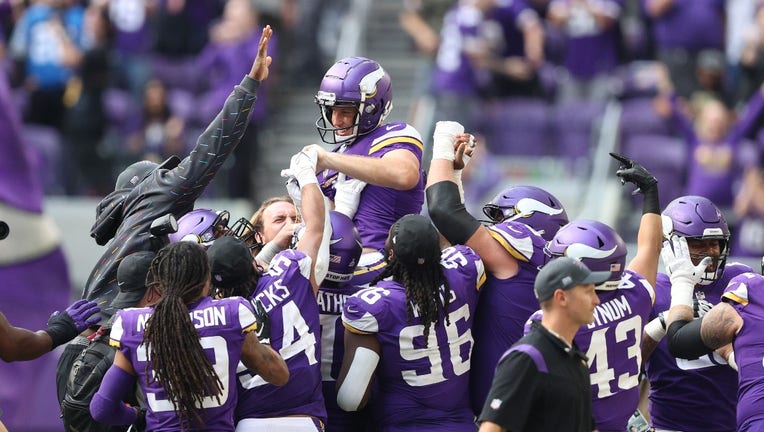 Greg Joseph #1 of the Minnesota Vikings is carried off the field by teammates after kicking the game winning field goal against the Detroit Lions at U.S. Bank Stadium on October 10, 2021 in Minneapolis, Minnesota.  ((Photo by Elsa/Getty Images))

MINNEAPOLIS - Mike Zimmer did what he could to unplug with the Minnesota Vikings on their bye week, at 3-3 after a 34-28 road win over the Carolina Panthers.

After having meetings with the coaching staff, Zimmer departed for his ranch in Kentucky and mixed family time with his grandkids and watching film from the first six games. One thing he didn’t do much of was watch this weekend’s NFL action.

The Vikings started to get back to work Monday, and they have a big task out of the bye. Minnesota has a four-game stretch, starting with a Halloween night home game on Sunday Night Football against the Dallas Cowboys. After that, the Vikings have road games at the Ravens and Chargers, and return home for their second NFC North game of the season against the Packers.

Those four opponents currently have a combined record of 20-6, with Cowboys and Packers being division leaders. That stretch of teams above .500 is why it was so crucial for the Vikings to get back to 3-3. They’ve won three of their past four games after a 0-2 start.

"We have to go play one week at a time. It’s important that we focus all of our attention on Dallas this week, and then we’ll worry about Baltimore the next week, and the Chargers and so on and so forth," Zimmer said Monday. "We’re getting ready to play some really good football teams, and for us to prove where we are, this stretch will be important."

Zimmer said the coaching staff did self-scouting over the bye week, and remains encouraged the Vikings are a better team than their 3-3 record shows.

The Vikings are fifth in the NFL in total offense. They’re tied for the NFL lead with 21 sacks through six games. But they’re also one of the highest-penalized offensive teams in the league, and that high-powered offense isn’t staying on the field long enough with 3-and-outs.

They’re an overtime fumble and a missed field goal away from being 5-1.

"I see a lot of good things there, and I see a lot of areas that we need to clean up. If we can correct those things and start clicking on all cylinders, I do feel good about this team," Zimmer said.

There are 11 games left on the schedule, but the cliché remains in place. The team’s focus is on the Cowboys.

"We have to put all of our focus and our intensity into this week during practice. We have to put it all into Dallas and trying to play the best we can," Zimmer said.