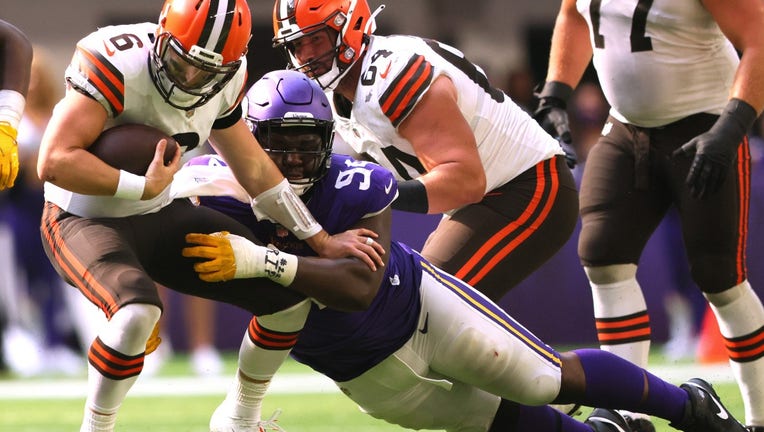 Baker Mayfield #6 of the Cleveland Browns is sacked by Dalvin Tomlinson #94 of the Minnesota Vikings during the fourth quarter at U.S. Bank Stadium on October 03, 2021 in Minneapolis, Minnesota.  ((Photo by Adam Bettcher/Getty Images))

MINNEAPOLIS - The Minnesota Vikings (5-5) will start preparations on Wednesday for the San Francisco 49ers, but they could be without a starter on the defensive line.

The Vikings on Tuesday placed defensive tackle Dalvin Tomlinson on the reserve/COVID-19 list. Players go on the list for either testing positive for the virus, or being considered a close contact to a carrier. Tomlinson said before the season he had not been vaccinated for COVID-19, but it’s not known if that has since changed.

Team officials haven’t said if Tomlinson has tested positive. Players who are not vaccinated and test positive are out a minimum of 10 days. Vaccinated players who test positive can return with consecutive negative tests.

Tomlinson has played in all 10 games this season, and is an integral piece in Minnesota’s run defense. He played 30 defensive snaps against the Green Bay Packers, and finished with three tackles. He has 1.5 sacks and 26 tackles on the season.

The Vikings are suddenly thin on the defensive line as they head to San Francisco. Danielle Hunter is out for the season with a torn pectoral muscle, and Michael Pierce is on injured reserve.

The Vikings also on Tuesday activated offensive lineman Dakota Dozier from the practice squad reserve/COVID-19 list. Dozier reportedly had to be hospitalized earlier this month due to what Mike Zimmer deemed COVID pneumonia.