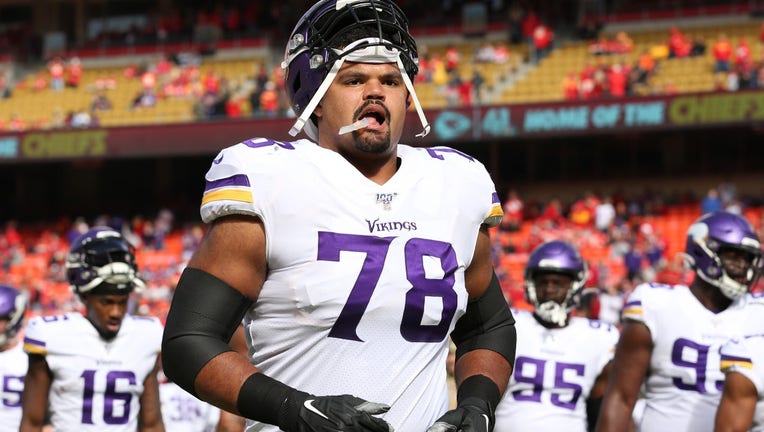 MINNEAPOLIS - Minnesota Vikings offensive lineman Dakota Dozier spoke publicly for the first time Wednesday about his experience with COVID-19, which ultimately put him in the hospital for three days with difficulty breathing.

Dozier, who spent his first four NFL seasons with the New York Jets before signing with the Vikings in 2019, has had a humbling season. He’s played in just four games, all on special teams, after getting 16 starts on the offensive line in 2020.

But in early November, as the Vikings were getting ready to face the Baltimore Ravens, Mike Zimmer revealed in his weekly news conference that one of his vaccinated players had to be hospitalized, dealing with COVID pneumonia.

"It definitely opened my eyes a little bit. The first couple days I really didn’t have more than a headache, then that night I went to the hospital, just it all hit me really fast," Dozier said.

Dozier recalls having a conversation with his wife, having difficulty breathing. He has two kids, a 3-year-old and 5-month-old. One of them has respiratory issues, so Dozier has a pulse oximeter in his home to test saturation of oxygen carried into red blood cells.

"I checked mine and it was 82, not really supposed to go below 90 so it really kind of freaked me out a little bit," Dozier said. "Thankful for the care I had in the hospital."

The COVID-19 pandemic has hit millions around the world. It’s caused death, forced families to quarantine and altered the way everyone does pretty much everything. For most, the symptoms are mild. That’s especially for athletes in good physical shape.

Zimmer pleaded for his team during training camp to get a COVID-19 vaccine. Protocols would be looser, it would be easier to carry on a more normal season. The Vikings got public criticism for having one of the lowest player vaccination rates in the NFL.

Dozier was vaccinated, still got the virus and had to be hospitalized.

"A lot of guys, not just guys in the league, younger guys in good shape, we’ve always heard ‘Hey, you’re going to do very well with this, you shouldn’t struggle too much,’" Dozier said. "I can remember sitting down, talking to my wife and thinking yeah, I have to go to the hospital. It was really serious."

Within a few days, Dozier’s condition improved and he was eventually released from the hospital. His biggest task was getting back into playing shape.

"The way I explained it, missing 10 days when I came back when I was working out initially, especially when I was like running, it felt like I had been off for two months. It took a while to get the conditioning back in," Dozier said.

Despite seeing his playing time limited and getting COVID-19, Dozier’s mentality has never shifted. He needs to make sure he’s ready, because whether it’s by injury or virus, he’ll never know if or when he’ll get called upon to block for Dalvin Cook, or protect Kirk Cousins.

He just knows it’s his job that when his number is called, it’s time to go to work.

"In today’s NFL, you have to be ready no matter what," Dozier said.

The Vikings head to Lambeau Field to take on the Green Bay Packers on Sunday, and two notable names were missing as the team held its first practice on Wednesday. Safety Harrison Smith (foot, shoulder) and tight end Tyler Conklin (hamstring) both did not practice.