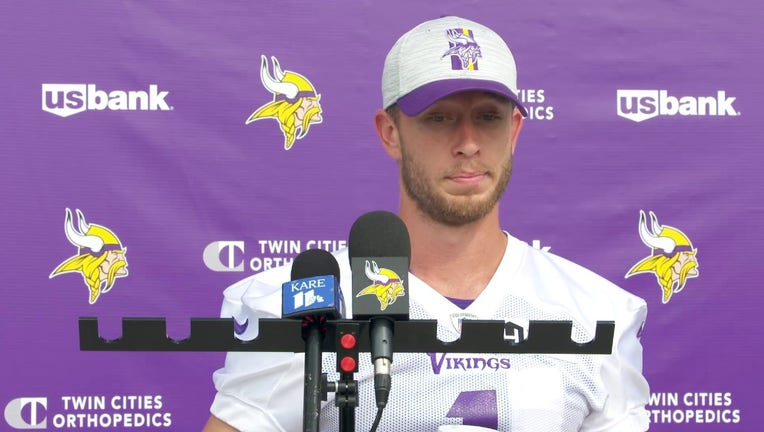 MINNEAPOLIS - Minnesota Vikings kicker Greg Joseph was named the NFC Special Teams Player of the Week after a 28-25 win over the New Orleans Saints on Sunday in London.

Joseph was a perfect 5-for-5 on field goals, including from 47 yards out to give the Vikings the lead with 24 seconds to play. Joseph also made kicks from 28, 36, 24 and 46 yards out as his five makes in one game are a new career-high. He’s also the ninth kicker in franchise history to make at least five field goals in a game.

Pete Bercich joins Jim Rich on Vikings Postgame Tonight for his takeaways from a 28-25 win over the Saints in London.

He’s the only kicker to make five in a game this season.

Through four games, Joseph is 8-for-10 on field goals, including making a career-long 56-yard attempt in Week 1 against the Green Bay Packers. That tied the franchise record for the longest made field goal. He’s also 7-for-7 on kicks inside 50 yards.

"Nothing changes for me. That’s me doing my job and I’m thankful for the team for putting me in that position. I just want to keep putting them through and keep putting this team in a position to win," Joseph said.

Joseph is the eighth Vikings' kicker to win NFC Special Teams Player of the Week, and the first since Dan Bailey in 2019.

"I just continue to tell him whether he makes it or not, my confidence level could not be higher in Greg. For him to go 5-for-5 and get NFC Special Teams Player of the Week is not a surprise to me one bit," Vikings coach Kevin O'Connell said. "His consistency of how he’s worked, how he treats every kick, he’s got a clear-cut focus and plan every time he goes to hit it. It’s paying off. "

The trip to London was a little extra special for Joseph. His grandfather was a big Tottenham Spurs fan.

"It was very cool, a surreal experience I’ll remember for the rest of my life. My grandpa was a Tottenham Spurs fan, so doing it in the stadium that we would’ve absolutely loved to see means a lot to me," Joseph said. "I love being over in England because of that atmosphere. A very cool weekend that I’ll never forget."

Joseph was a big piece of a key game for the special teams unit in the win over the Saints. Ryan Wright and Jailen Nailor executed a perfect fake punt, Kris Boyd forced and recovered a fumble on a punt and Kene Nwangwu and Jalen Reagor had significant returns.

The Vikings are one of seven teams in the NFL with a 3-1 record through four games. The Vikings host the Chicago Bears at noon Sunday, looking to get off to a 3-0 start in the NFC North Division, in a game you can see on Fox 9.