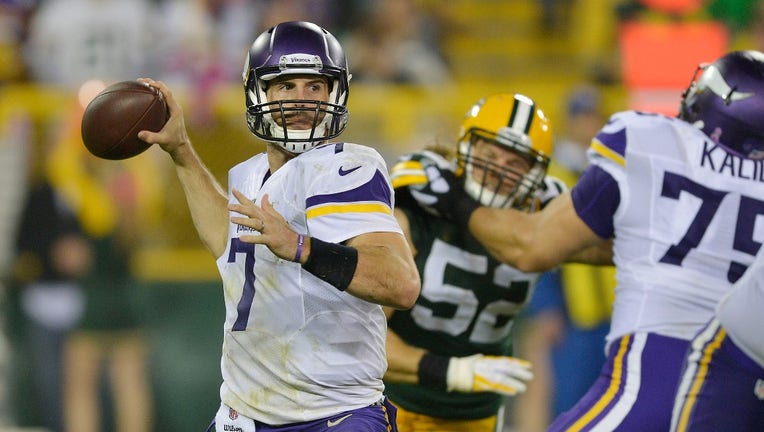 Christian Ponder #7 of the Minnesota Vikings passes the ball during an NFL game against the Green Bay Packers at Lambeau Field, October 2, 2014 in Green Bay Wisconsin.  ((Photo by Tom Dahlin/Getty Images))

MINNEAPOLIS - The NFL Draft is over and the Minnesota Vikings start rookie mini camp this week at TCO Performance Center.

The Vikings drafted Christian Ponder No. 12 overall in 2011. He played 38 games and started 36 over four seasons. He went 14-21-1, averaging 175 yards per game and had 38 touchdowns, with 36 interceptions. Simply not good enough for a quarterback at No. 12 overall. Ponder has been out of football since 2014, his last season with the Vikings.

The Minnesota Vikings finished the 2022 NFL Draft with 10 players and Sunday night on Fox 9 Sports Now, Hobie Artigue and Ron Johnson look back at the weekend.

Matt Kalil was the No. 4 overall pick in 2012 out of USC. He started 66 games over four-plus seasons with the Vikings, and was a Pro Bowl pick his rookie year. He played for the Carolina Panthers in 2017, and has been out of football since.

The Vikings drafted Harrison Smith No. 29 overall in 2012. He’s currently the longest-tenured player on the roster, entering his 11th season with Minnesota. He’s been a six-time Pro Bowl pick, and as All-Pro in 2017. In 144 starts, Smith has 16.5 sacks, 29 interceptions and four returned for touchdowns.

Xavier Rhodes was the No. 25 overall pick in 2013. He started 97 games over seven seasons with the Vikings, finishing with 10 interceptions and one returned for a touchdown. He was a three-time Pro Bowl pick, and an All-Pro in 2017. He has three interceptions the last two seasons in Indianapolis.

The Vikings moved back into the first round at No. 29 to draft Cordarrelle Patterson, a wide receiver with electric kick return skills. He had nine total touchdowns as a rookie on the way to earning Pro Bowl and All-Pro honors. He played in 64 games over four seasons with Minnesota, and was probably never fully-utilized. He’s since played with the Raiders, Patriots, Bears and Falcons.

Anthony Barr was the No. 9 overall pick in 2014, Mike Zimmer’s first draft pick in Minnesota. He was named to the Pro Bowl four times, and has 17.5 sacks and four interceptions in 98 starts with the Vikings. He’s a free agent and still looking for a home in 2022.

Teddy Bridgewater went No. 32 overall in 2014, and was poised to be the Vikings’ franchise quarterback before a career-altering knee injury just before the start of the 2016 season. He was a Pro Bowl pick and led the Vikings to the playoffs the year before. He’s since spent time with the Saints, Panthers and now the Broncos.

Trae Waynes went No. 11 overall in 2015, and spent five seasons with the Vikings before spending 2021 with the Bengals. He started 53 games in Minnesota, and had seven interceptions. He never lived up to his full potential.

The Vikings drafted Laquon Treadwell No. 23 overall in 2016, and never really got a chance to reach his potential. He played in 70 games over four seasons, starting 23 and had 104 catches for five touchdowns over that time. He was released after the 2019 season.

The Vikings drafted Mike Hughes No. 30 overall in 2018, and he just simply couldn’t stay healthy. He played in 24 games, starting seven over three seasons in Minnesota, dealing with a torn ACL and a neck injury. He returned an interception for a touchdown in his NFL debut, but has just three interceptions for his career. He was traded to the Chiefs before the 2021 season.

The Vikings took Garrett Bradbury No. 18 overall in 2019, and he’s started 45 games for Minnesota at center.  He’s had ups and downs in his career, missing three games last season after having COVID-19 and then getting benched. The Vikings recently declined his fifth-year option. There’s plenty of speculation that 2022 might be his last year in Minnesota.

The Vikings traded Stefon Diggs and moved up in the 2020 draft to get Justin Jefferson No. 22 overall. He’s been a star, with 196 catches for 3,016 yards and 17 touchdowns. He’s shattered Vikings’ rookie and single-season receiving records, and has become one of the top receivers in the NFL.

The Vikings drafted Jeff Gladney No. 31 overall in 2020, and he had a promising rookie year with 81 tackles in 15 starts. Gladney was arrested last offseason, accused of assaulting a woman in Texas and released by the team after being indicted. He was later found not guilty in the case, and signed with the Arizona Cardinals for the 2022 season.

The Vikings drafted Christian Darrisaw No. 23 overall last year. He played in 12 games and started 10 as a rookie, missing most of the offseason with core and groin injuries that required two surgeries. We’ll find out if Darrisaw can lock down a starting job on the offensive line in 2022.

A speedy, hard-hitting safety out of Georgia, the Vikings traded back to the last pick of the first round to get Lewis Cine. He was one of five defense players for the Bulldogs drafted in the first round, coming off winning a national title. The hope is he’s the perfect complement to Harrison Smith in the secondary.