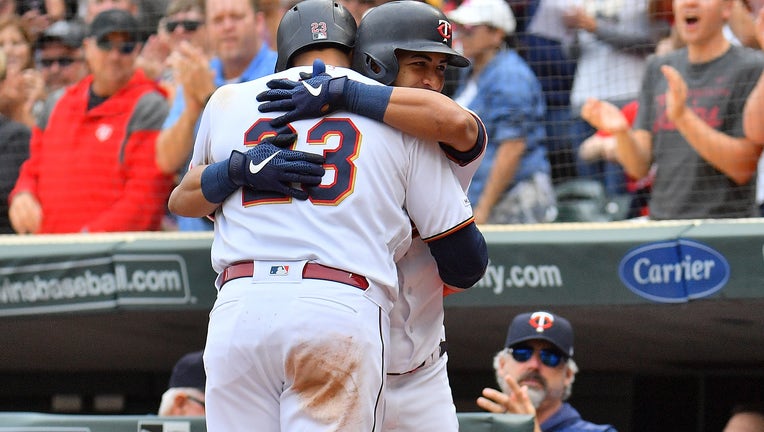 MINNEAPOLIS, MINNESOTA - SEPTEMBER 22: Nelson Cruz #23 hugs Eddie Rosario #20 of the Minnesota Twins after Cruz hit his 400th career home run in the 4th inning of their game against the Kansas City Royals at Target Field on September 22, 2019 in Minn

MINNEAPOLIS (FOX 9) - With the magic number down to three and their first Central Division Title since 2010 in their sights, the Minnesota Twins have decided to host public viewing parties around the Twin Cities metro for the last six games of the season.

Starting with Tuesday’s game against the Detroit Tigers, the Twins will host a different watch party each game though Sunday’s finale against the Kansas City Royals.

Along with watching the game, those who attend will get to meet T.C Bear, take pictures with the iconic Bomba Counter and enter giveaways for the chance at winning various prizes.

“Our fans have stood strong with us since Opening Day, and now, thanks to the generosity of our partners with the cities of Minneapolis and St. Paul, along with the Mall of America, we can bring Twins fans together to engage with the club as we make our final postseason push,” Twins President and CEO Dave St. Peter in statement.

The time and locations of the viewing parties is as follows: