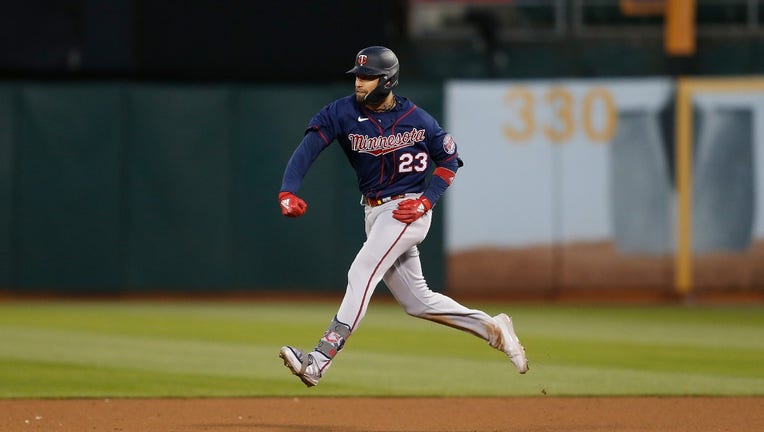 Royce Lewis #23 of the Minnesota Twins celebrates as he rounds the bases after hitting a solo home run in the top of the fifth inning against the Oakland Athletics at RingCentral Coliseum on May 17, 2022 in Oakland, California.  ((Photo by Lachlan Cunningham/Getty Images))

MINNEAPOLIS - Royce Lewis doubled and hit his second career major league home run in Tuesday night’s loss to the Oakland Athletics, but it wasn’t enough to keep him with the Minnesota Twins.

Twins manager Rocco Baldelli said after the game they were sending the No. 1 overall pick in 2017 down to the Class AAA St. Paul Saint. The team has reinstated shortstop Carlos Correa from the 10-day injured list. Correa suffered a finger injury after being hit by a pitch earlier this month in a game against the Baltimore Orioles.

With Correa unable to stay off the IL at the time, the Twins called up Lewis to make his major league debut. He more than handled the spotlight, hitting .308 with two homers, four doubles, five RBI and scored five runs in 11 games. He had 12 hits in 39 at-bats, and had an on-base plus slugging percentage of .889.

The Twins opted not to keep Lewis with the big league club and try to move him around between third base, first base or an outfield spot. Despite being one of the hottest hitters on the team in his 11 games, the Twins want him playing shortstop, and it’ll be with the Saints.

"Any time a guy is playing the way Royce is playing for us, and you're not going to be able to potentially put him in the lineup where you want, things get imperfect pretty quickly," Baldelli said after Tuesday’s loss. "It's not an easy decision. He's played great. He's got some electricity in that bat for a wiry guy."

The move comes less than a week after the Twins took public criticism for talking publicly about a plan to give star center fielder Byron Buxton planned days off, with the goal for him to play at least 100 games this season. The Twins lost to the Cleveland Guardians 3-2 last Saturday at Target Field, and opted not to pinch hit Buxton in the ninth inning with a chance to tie the game.

Correa, 27, came to the Twins during Spring Training as one of the biggest free agent signings in franchise history, signing a three-year, $105 million deal. In 24 games, Correa is hitting .255 with five doubles, two homers, 11 RBI and has scored 12 runs.

The Twins (21-16) have a 2.5 game lead over the Chicago White Sox in the American League Central Division.