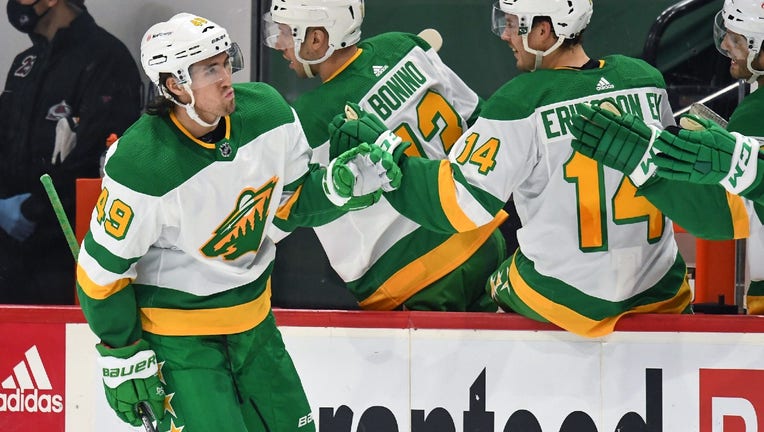 MINNEAPOLIS - Hockey is back for the Minnesota Wild.

Nearly two weeks ago, the NHL put the Wild’s season on pause after a 2-1 loss to the Colorado Avalanche on Feb. 2. Marcus Foligno was already on the NHL’s COVID-19 Protocol List, and five others soon followed.

Minnesota Wild back at practice after COVID-19 outbreak

The Minnesota Wild are getting ready to return to action after a COVID-19 outbreak shut down the team earlier this month.

The Wild was shut down, their practice facility closed and at its height, 12 players landed on the league’s COVID-19 list. Blaine native Nick Bjugstad was one of them.

"It was a long 10 days, whatever it was. I don’t even know. Lot of sitting around, lot of laying in the bed," Bjugstad said after practice Monday. "It was a tough first practice coming back but once I started to get a sweat and get moving a little bit, second day was better and today was even better."

The Wild was cleared to return to practice last Friday, and did so with just 14 skaters and two goalies. That number grew to 20 by Saturday. Practices have been held at Xcel Energy Center to limit travel and further exposure to COVID-19.

Assuming further testing clears, the Wild will be back in action Tuesday night at the L.A. Kings. They had six games postponed and dropped to sixth in the Honda West at 6-5, 12 points. They’ve played 11 games, the fewest in the West. Other than Colorado, every other team has played at least 13.

So what’s the approach? Keep it simple and be ready to play.

"You’re trying to catch a moving train. The other teams have been playing, they haven’t had a break and we’re coming off a 10-day break. It’s going to be tough to get up to speed," defenseman Ryan Suter said. "Just focus on making sure you’re ready to go from the start."

The Wild will be without several regulars Tuesday night. Nick Bonino, Ian Cole and Nico Sturm have been removed from the COVID-19 list, but are not likely to play since they haven’t practiced. Jared Spurgeon is also off, but won’t play due to injury.

As they have already this season, the Wild will rely on their Taxi Squad to fill many of the holes created by COVID-19. Defenseman Calen Addison will be the latest to make his NHL debut, and he’ll play alongside Ryan Suter.

Addison has played three games with the Iowa Wild this season, and has three assists. He got the call last Thursday, immediately drove north from Iowa and started practicing Friday at Xcel Energy Center.

"This is crazy, really a lifelong dream come true. I mean I’ve waited almost 21 years for this," Addison said." Any hockey player growing up always wants to play in the NHL, that’s their lifelong goal. For that to be happening tomorrow is something special. I’m just thankful they believe enough in me to put me in the lineup."

Wild coach Dean Evason just wants Addison to keep it simple, and be himself.

"We expect him to do what he does. He doesn’t have to be Jared Spurgeon out there, he has to be Calen Addison and that’s what we’re going to ask him to do," Evason said. "We expect him to compete his butt off like we ask all our guys."

Starting in L.A. Tuesday, the Wild will play three games in five nights. Evason isn’t worried about them physically looking rusty and being sluggish after three practices that ramped up in intensity each day. Their focus is being mentally ready, with needing to play catch-up.

"These guys are professional athletes, they’re in top shape. Their bodies are ready to go, it’s a matter of if you have your head in the right space, if you get yourself motivated and ready to play and playing intense when the puck is dropped," Evason said. "It starts in practice."

They’ll find out Tuesday how ready they are to get back into it after three practices at Xcel Energy Center.