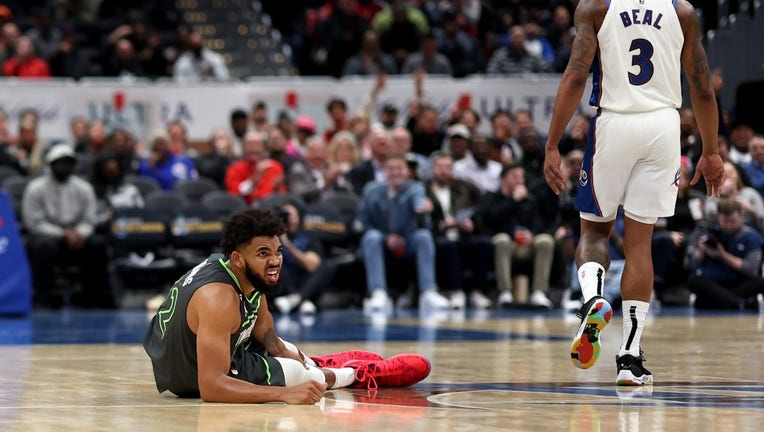 Karl-Anthony Towns #32 of the Minnesota Timberwolves reacts after being injured in the third quarter against the Washington Wizards at Capital One Arena on November 28, 2022 in Washington, DC. ((Photo by Rob Carr/Getty Images))

MINNEAPOLIS - The Minnesota Timberwolves suffered their third straight loss Monday night, 142-127 at the Washington Wizards Monday night, and they’re hoping an injury to Karl-Anthony Towns is just a scare.

Towns suffered a non-contact injury to his right calf running down the court to play defense in the third quarter. He took a step, immediately went down grabbing his lower right leg and had to be helped off the court by teammate Rudy Gobert and a trainer, unable to put any weight on the leg.

He went straight to the locker room, and was quickly ruled out for the rest of the game. He scored eight points, had two rebounds and four assists in 22 minutes before the injury. Timberwolves officials ruled him out with a right calf strain, which would actually be good news for Towns until it can be further evaluated.

Initial fears were that he suffered an Achilles injury. According to ESPN's Adrian Wojnarowski, it appears Towns may have avoided serious injury.

The Timberwolves were 10-10 entering Monday night’s game, and Towns had been averaging 21.4 points, 8.5 rebounds and 5.4 assists per game. He agreed to a supermax contract extension before the season.