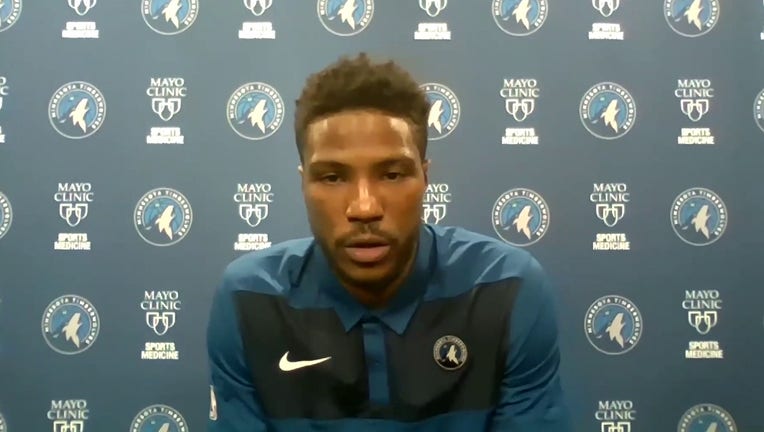 MINNEAPOLIS - The Minnesota Timberwolves, already without D’Angelo Russell due to arthroscopic knee surgery, will now be without guard Malik Beasley for about a month.

The NBA is suspending Beasley 12 games for conduct stemming from his September arrest for threats of violence in connection with an incident outside his Plymouth home. He pleaded guilty in the case to pointing an assault rifle at a family who was on a Parade of Homes tour.

For pleading guilty, Beasley had a felony drug charge dismissed. Beasley was sentenced to 120 days in the Hennepin County workhouse, which could be served on home confinement after the Wolves's season ends.

Minnesota Timberwolves guard Malik Beasley spoke publicly on Wednesday for the first time since being arrested in September and charged in October in connection with an incident outside his Plymouth home.

"As an organization, we fully support today’s decision by the NBA. As we work together with Malik to advance his development as a player and a person, we look forward to seeing his growth," the statement reads.

The Wolves dropped to an NBA-worst 7-26 after Wednesday’s 133-126 loss at the Chicago Bulls in overtime. It doesn’t appear Beasley plans to appeal the suspension, and being out 12 games would have him returning to the lineup on Saturday, March 27 against the Houston Rockets.

Beasley, who signed a four-year, $60 million contract after the incident, is having the best season of his NBA career. He’s averaging 20.5 points, 4.6 rebounds and 2.5 assists per game. He’s also shooting 40.6 percent from the perimeter for the season.

The Timberwolves are at the Washington Wizards Saturday night.