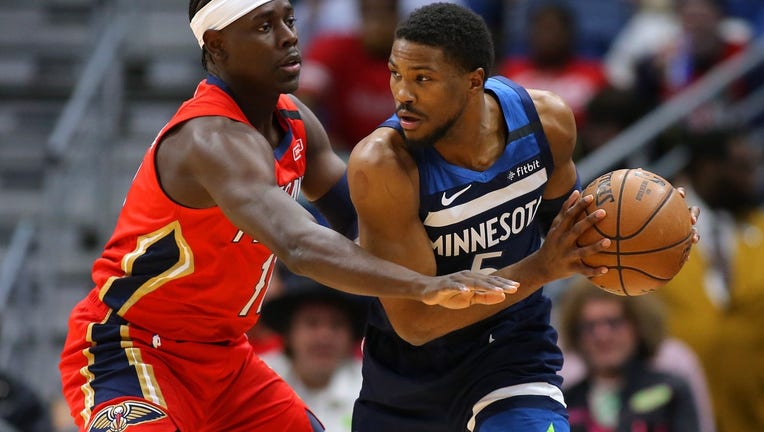 Malik Beasley #5 of the Minnesota Timberwolves drives against Jrue Holiday #11 of the New Orleans Pelicans during the first half at the Smoothie King Center on March 03, 2020 in New Orleans, Louisiana. ((Photo by Jonathan Bachman/Getty Images))

MINNEAPOLIS - Minnesota Timberwolves guard Malik Beasley was arrested Saturday night at his Plymouth home for probable cause possession of a controlled substance and receiving/concealing stolen property, according to Hennepin County Jail records.

Beasley, 23, was taken into custody just before 9 p.m., and is being held at the Hennepin County Jail without bail until he can seee a judge. The Timberwolves are currently participating in a three-week, in-market workout program, and team staff and players are quarantined at a downtown Minneapolis hotel during the camp.

"We are aware of the situation involving Malik Beasley and are in the process of gathering information at this time," the team said in a statement.

Beasley, who participated in individual workouts at Mayo Clinic Square earlier this summer, is not participating in the in-market program. Beasley came to the Wolves last February as part of the massive roster overhaul done by Gersson Rosas during the trade deadline.

Beasley is set to become a restricted free agent after the season.

According to jail records, Beasley was released from jail Sunday afternoon.