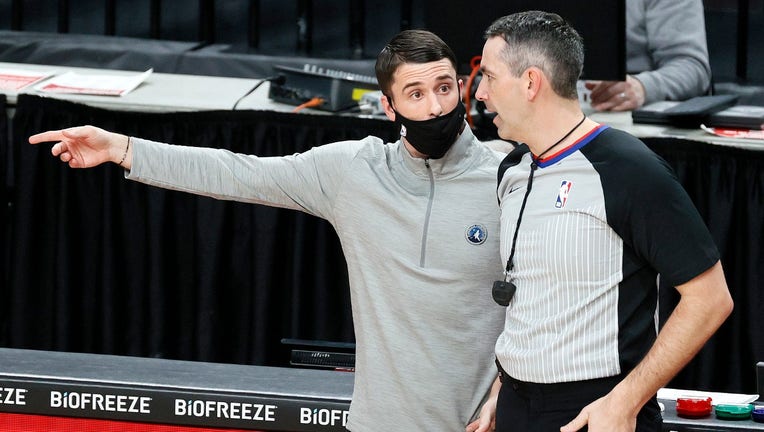 Head coach Ryan Saunders of the Minnesota Timberwolves during the third quarter against the Portland Trail Blazers at Moda Center on January 07, 2021 in Portland, Oregon. ((Photo by Steph Chambers/Getty Images))

MINNEAPOLIS - The Minnesota Timberwolves announced Sunday night after a loss to the New York Knicks that they have fired head coach Ryan Saunders.

The Timberwolves are now 7-24 on the season and in last in the Western Conference after a 103-99 loss to the Knicks in New York. They were facing their former head coach, Tom Thibodeau, who Saunders replaced.

"We would like to thank Ryan for his time and commitment to the Timberwolves organization and wish him the best in the future," Timberwolves President of Basketball Operations Gersson Rosas said in a statement Sunday night. "These are difficult decisions to make, however this change is in the best interest of the organization’s short and long-term goals."

Thibodeau led the Timberwolves to their first playoff appearance in 14 years, with the help of Jimmy Butler, in the 2017-18 season. The last time the Wolves had been in the playoffs was a 2004 run to the Western Conference Finals with Kevin Garnett, and Ryan's father, Flip Saunders, as head coach.

Since January of 2019, the Wolves have gone 43-94 under Ryan Saunders, who only got five games with stars Karl-Anthony Towns and D'Angelo Russell on the court together. Towns missed time earlier this season after injuring his left wrist in the second game of the season, then missed 13 games after testing positive for COVID-19.

Russell is out the next four to six weeks after having arthroscopic surgery on his left knee to remove "a loose body."

According to Shams Charania with The Athletic, Minnesota is hiring Chris Finch to be the team’s next head coach. Finch has been an assistant coach for the Toronto Raptors, who were just in Minneapolis Friday night to play the Wolves.

The Timberwolves are 26-69 over the last two seasons, which is the worst in the NBA. Last year, the Wolves finished a season shortened by the COVID-19 pandemic 19-45 and were not invited to the NBA bubble in Florida.

Timberwolves officials say they'll have more details on the team's next head coach on Monday. Finch is expected to be hired on a multi-year deal. Finch and Rosas previously worked together in Houston, and Finch was just in the Twin Cities as the Wolves lost to the Raptors 86-81 on Friday.