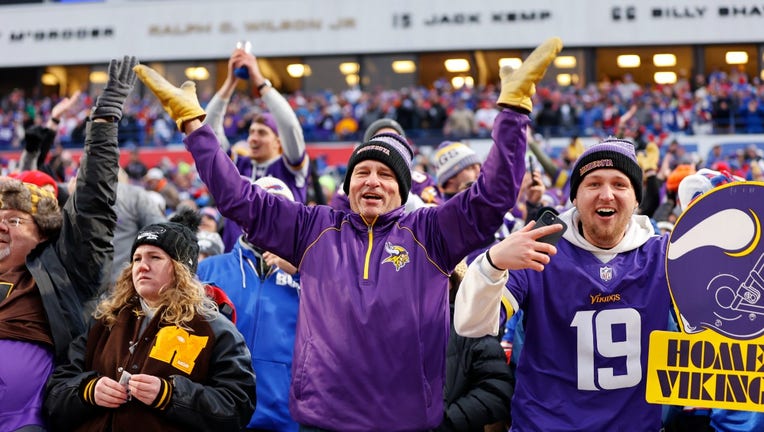 Minnesota Vikings fans cheer during their game against the Buffalo Bills at Highmark Stadium on November 13, 2022 in Orchard Park, New York.  ((Photo by Isaiah Vazquez/Getty Images))

MINNEAPOLIS - The Minnesota Vikings are 8-1 and winners of seven straight after an improbable 33-30 comeback win in overtime at the Buffalo Bills on Sunday.

Sure, they caught some breaks. But they also made big plays in key moments, and created their own luck in big spots. Not only are the Vikings on a seven-game win streak, all seven have been one possession games in the fourth quarter. The Vikings became the first team in 49 years to come back from down 14 points at Buffalo, and leave with a win.

Last year, 14 of the Vikings’ 17 games came down to one possession in the fourth quarter. They went 6-8 in those games. Now, the Vikings have three straight home games against the Cowboys, Patriots and Jets, but can’t take the foot off the gas or feel comfortable. After all, the destination is the Super Bowl.

"Whatever ultimately is going to be the final chapter and the total story of this team this year, there’s a lot out in front of us and we’ve got to continue to just improve and put our head down and make it about the work and the preparation," Vikings coach Kevin O’Connell aid Monday.

Here are takeaways from their latest win.

Kirk Cousins was stopped short on 4th-and-goal at the 1-inch line, but the game wasn’t over. Far from it. Josh Allen had to get the Bills some room to take a knee and run out the clock. The Bills couldn’t take a safety, give up two points and hope the Vikings wouldn’t come back for a potential game-winning field goal.

Josh Allen botched the snap, and Eric Kendricks pounced on it in the end zone. Touchdown Vikings in one of many game-changing plays Sunday. It's the type of play that simply never goes in the Vikings' favor.

At this point, big games for Justin Jefferson are becoming habit. Sunday might have been his best yet in a Vikings’ uniform. He had 10 catches for 193 yards and the Vikings’ first touchdown, but made arguably the best catch of his career late in the fourth quarter. Facing 4th-and-18, he made a one-handed grab over Cam Lewis for a first down. If he doesn’t make the catch, the game is over. A few plays later, he makes a grab to get the ball down to the 2-yard line.

Just when we think we’ve seen it all, he puts on a show for a national audience.

"He’s one of the ultimate competitors that I’ve been around. He truly believes that he’s capable of greatness every time he goes on the field. I happen to agree with him," O’Connell said.

A road win meant chains on the plane ride home for the Vikings. Only this time, they weren’t for Kirk Cousins. They were for Patrick Peterson, known as "the closer," after intercepting Allen twice. The second was in overtime in the end zone, with Allen trying to hit Gabriel Davis for the game-winner.

A shirtless Peterson wore a collection of chains on the plane, made that much better as he says he doesn’t own his own chain. It’s fun to win.

The Vikings were 7-1, but not getting any national respect. Their competition was weak, they were getting lucky. Then, they go to Buffalo, a potential Super Bowl favorite, and beat Josh Allen. Somehow, they’re still two-point underdogs at home against the Cowboys this week. That’s despite getting their first signature win this season.

Two big errors by the officiating crew won’t go unnoticed from Sunday’s game. Before Cousins was denied at the goal line, Dalvin Cook dropped a potential go-ahead touchdown. The Bills had 12 defenders on the field for the play, no flag.

Perhaps more egregious, Davis made a sliding catch as the Bills drove for a game-tying field goal after Kendricks’ touchdown. Only problem is he clearly bobbled the ball as he was going out of bounds. It wasn’t a catch, and despite the clock being stopped, it wasn’t reviewed. The NFL admitted the error after the game.

KIRK OR JJ FOR MVP?

We’re nine games into the season, and the Vikings have a legitimate case for two NFL MVP candidates. Cousins is completing 64 percent of his passes for 2,356 yards, 14 touchdowns and eight interceptions. He’s led fourth quarter comebacks in five of their eight wins. He’s frustrating at times, but making plays when they have to be made.

Jefferson’s play speaks for itself. He’s fourth in the NFL in receptions, second in yards and tied for the lead in catches of 40-plus yards. Both have a case to be in the MVP conversation.

"I can tell you that they’re both incredibly impactful reasons why we’re 8-1 as a football team. I’ll let you guys figure out that," O’Connell said.

The Vikings lost both left tackle Christian Darrisaw and defensive back Akayleb Evans during Sunday’s game. They are both in the concussion protocol, and we won’t know more for Sunday’s game against the Cowboys until later in the week.

Blake Brandel stepped in for Darrisaw and played well. Andrew Booth Jr. saw time in the secondary, as did Duke Shelley, who made a pair of game-changing plays on Dawson Knox in the win.

The Vikings are 8-1, and earning national attention. Enjoy the season.