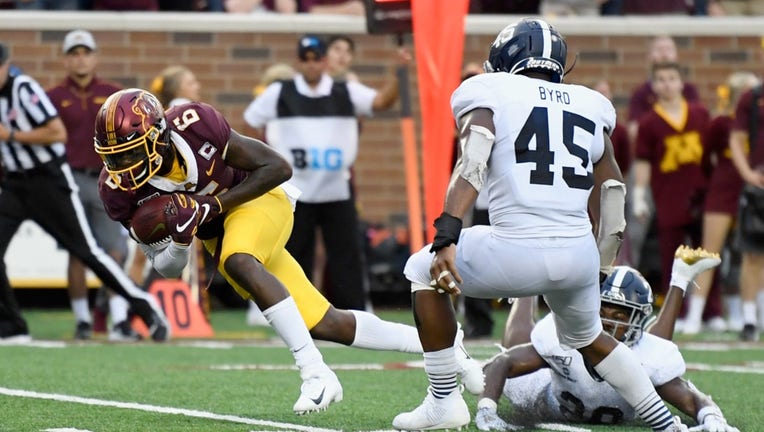 Tyler Johnson #6 of the Minnesota Gophers is tripped by Kindle Vildor #20 of the Georgia Southern Eagles as Rashad Byrd #45 looks on during the fourth quarter of the game at TCF Bank Stadium on September 14, 2019 in Minneapolis, Minnesota. The Gopher (Hannah Foslien/Getty Images)

MINNEAPOLIS - For the third straight week, the University of Minnesota football team had to come from behind to earn a non-conference win.

Georgia Southern scored 14 straight points in the fourth quarter to take a 32-28 lead on the Gophers with 3:47 left. It happened on a blocked field goal returned 77 yards for a touchdown, and a strip-sack fumble of Tanner Morgan, returned by the Eagles 44 yards for a score.

Morgan responded with a 13-play, 75-yard scoring drive capped with a game-winning 2-yard touchdown pass to Tyler Johnson with 13 seconds left. The Gophers could exhale, they’re 3-0 heading to Purdue after a much-needed week off.

It was just one play in a huge day for Johnson. There’s plenty to fix after three games, but they’re three wins. Here are takeaways from Saturday’s game.

It wasn’t a matter of if Tyler Johnson would have a big game for the Gophers, it was when. Before Saturday, the All-Big Ten receiver had seven catches for 99 yards and was without a touchdown in wins over South Dakota State and Fresno State. He was the go-to receiver against Georgia Southern, with 10 catches for 143 yards and three touchdowns. The Gophers escaped with a 35-32 victory on Johnson’s last touchdown.

His first score went for a 73-yard touchdown. It was his third career three-touchdown game with the Gophers, a school record. In his last 16 games, Johnson has 95 catches for more than 1,400 yards and 15 touchdowns. Johnson was named the Big Ten Co-Offensive Player of the Week on Monday for his efforts.

The Gophers should never have had to make a comeback to beat Georgia Southern, but can point to struggles along the offensive line as one of the main reasons why. Tanner Morgan was sacked five times, and the Gophers managed just 1.9 yards per carry. Minnesota’s offensive line averages about 315 pounds across the board, led by 400-plus pound tackle Daniel Faalele. If that group can’t get a push against Georgia Southern, it’s a major issue going forward for Big Ten play.

Explosive plays are one category PJ Fleck stresses in his “78 percent” strategy to win football games. The Gophers again let Georgia Southern make more explosive plays, yet found a way to come up with the victory. Minnesota got one with Tanner Morgan’s 73-yard touchdown pass to Tyler Johnson. The Eagles got one with a 21-yard touchdown run after intercepting Morgan in the first quarter.

They got two more in the fourth quarter, and nearly left TCF Bank Stadium with the victory. Georgia Southern blocked a Michael Lantz field goal and ran it back 77 yards for a touchdown. On Minnesota’s next offensive series, the Eagles got a strip sack of Morgan and ran it back 44 yards to take a 32-28 lead late in the fourth quarter. The Gophers are playing with a bit of fire when it comes to giving up big plays. They have some things to fix, or they might get burned.

The numbers for sophomore running back Bryce Williams won’t jump off the page at you. He had 14 carries for 28 yards, two yards per touch. But Williams was the last healthy running back available in the second half Saturday. Mohamed Ibrahim didn’t play, Shannon Brooks is still coming back from a knee injury and Rodney Smith and Cam Wiley both suffered injuries during the game.

Williams stepped in with a short touchdown run early in the fourth quarter, and also caught one pass for 10 yards. He’s yet another option in Fleck’s offensive attack.

Gophers need to get healthy

The bye week could not have come at a better time for the Gophers. Ibrahim, Brooks and linebacker Kamal Martin did not play due to injuries, and Smith and Cam Wiley were injured during the game. Carter Coughlin has been dinged up with minor injuries in the first two games.

One of the top priorities moving forward is keeping Tanner Morgan healthy. Zack Annexstad isn’t coming back any time soon after having foot surgery, and the quarterback options behind him, Jacob Clark and Cole Kramer, haven’t thrown a collegiate pass yet. Fleck said after Saturday’s close win he expects most of his injured players to return at Purdue. But the Gophers have faced enough adversity through three games that injuries would just be piling on.

PJ Fleck said it throughout fall camp and into the early part of the season: Tanner Morgan has an incredible ability to respond. For the second straight week, Morgan led a crunch-time scoring drive to lift the Gophers to a win.

He finished an 11-play scoring drive at Fresno State with a game-tying 20-yard touchdown strike to Chris Autman-Bell. Morgan also extended that game in overtime with a 4-yard rushing touchdown before Antoine Winfeld Jr.’s heroics.

With Minnesota trailing Georgia Southern 32-28 after he was sacked and fumbled, Morgan led the Gophers on a 13-play, 75-yard scoring drive and kept the game live in a 3rd-and-30 situation. It hasn’t been pretty at times, but Morgan has made every play when the Gophers have absolutely had to have it.

Take the week off while Big Ten teams beat up on each other. A grueling Big Ten stretch starts Sept. 28 at Purdue.