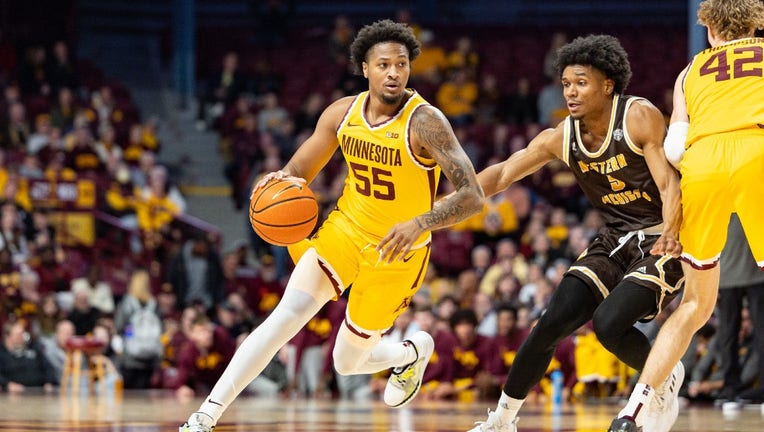 Ta'Lon Cooper had 17 points, eight rebounds and 10 assists as the Gophers opened the 2022-23 season with a 61-60 win over Western Michigan Monday night at Williams Arena. (credit: University of Minnesota Athletics)

MINNEAPOLIS - Ben Johnson opened his second season with the University of Minnesota men’s basketball team with a 61-60 win over Western Michigan Monday night at Williams Arena.

On the surface, Gophers’ fans might be alarmed at only a one-point win over a directional school. If you watched the game on BTN Plus, the Broncos hit late 3-pointers to make the score closer than the game actually was.

It looked a lot like a first game, but the Gophers are 1-0 despite not having Jamison Battle or Braeden Carrington available. Here are takeaways from Monday’s win.

Dawson Garcia said all offseason he dreamed of the day he wore a Minnesota jersey on the court at Williams Arena. He made his debut Monday, and didn’t disappoint. Garcia finished with game-high 23 points and grabbed seven rebounds, shooting 8-of-16 from the field and 3-of-5 from the perimeter.

We saw why he was a McDonald’s All-American two years ago, making big plays in the second half when the game got uncomfortably close. Gophers fans are salivating to see how his game can grow when Battle gets back on the court.

A BIG NIGHT FOR TA’LON COOPER

Johnson went to transfer portal to get experience in the backcourt. Enter Morehead State’s Ta’Lon Cooper, who flirted with a triple-double in his Gophers’ debut. He finished with 17 points, eight rebounds and 10 assists in 39 minutes. He also gave a spark when play started to get flat in the second half. The Gophers will need his veteran presence when Big Ten play starts.

That stat sheet says the Gophers finished with 16 turnovers. Many of them were on lazy passes, when Broncos’ players jumped passing lanes.

Probably more alarming is the 17 offensive rebounds the Gophers allowed. Western Michigan shot just 8-of-34 from three-point range, so many of those were on long rebounds Minnesota couldn’t get to. Others were times where Gophers’ teammates battled each other for the rebound, only for it to go out of bounds. It’s something that can be corrected, and will be going forward.

FREE THROWS ARE AN ISSUE

The ugliest stat of the night, and the reason the score was as close as it was? Free-throw shooting. The Gophers finished just 9-of-23 (39.1 percent) from the charity stripe, including missing their last five straight. Taurus Samuels missed three of his last four. Samuels, Pharrel Payne and Cooper went a combined 4-of-13 from the line. Let’s hope it improves.

The Gophers got the win Monday night despite missing their leading scorer from last season, Battle. He was at the game and in a walking boot after recently having a minor foot procedure. Johnson said he’s week-to-week, and the hope is he could return as early as next Monday against DePaul. Minnesota was also without freshman guard Braeden Carrington, who could compete for a starting spot. He could be back as early as Friday night against St. Francis Brooklyn.