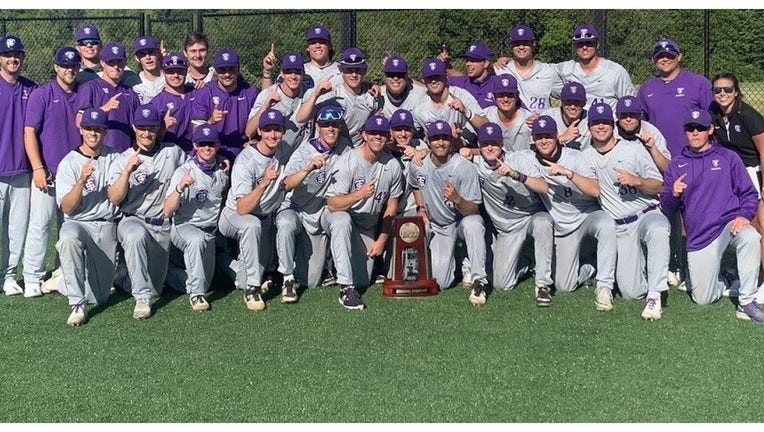 MINNEAPOLIS - In its final season playing in Division III, the University of St. Thomas baseball team is headed to the College World Series.

The No. 19-ranked Tommies (32-8) beat Pacific twice on Monday to win the Collegeville Regional, and they’re now one of eight teams remaining in the NCAA Baseball Tournament. In game one, St. Thomas trailed 4-0 after two innings before rallying for a 7-4 win to force a decisive Game 2.

In the second game, the Tommies had an 8-4 lead in the seventh inning before Pacific rallied to take a 9-8 lead. St. Thomas answered with a rally of its own in the top of the ninth, scoring five runs to take a 13-9 lead that would end up being the final.

Josh Thorp reached on an error to start the rally, then scored on a throwing error to tie the game 9-9. Sam Kulesa gave the Tommies a 10-9 lead with a sacrifice fly. St. Thomas added three more on run-scoring hits from Jake Porter and Charlie Bartholomew, and another sacrifice fly from Charlie Eldredge.

St. Thomas won three elimination games over the span of 24 hours, and avenged a winner’s bracket loss to Pacific on the way to advancing to the College World Series. The Tommies had 10 true freshmen or redshirt freshman that all had big roles in winning the weekend regional, including pitcher Jack Blesch, who got the start in Game 2 of the championship series. He allowed four runs and struck out six before leaving with an 8-4 lead.

The Tommies head to Cedar Rapids, Iowa, this week for the eight-team College World Series. It’s the program’s seventh appearance since 1999, and first since 2014. St. Thomas is 20-3 in its last 23 games, and is 6-0 in games decided by two runs or less. St. Thomas has scored 63 runs in eight playoff wins. They’ve scored 36 in the seventh, eighth and ninth innings.

St. Thomas will open the College World Series on Friday against Adrian. The Tommies will make the move up to play in Division I, starting in the 2021-22 season.