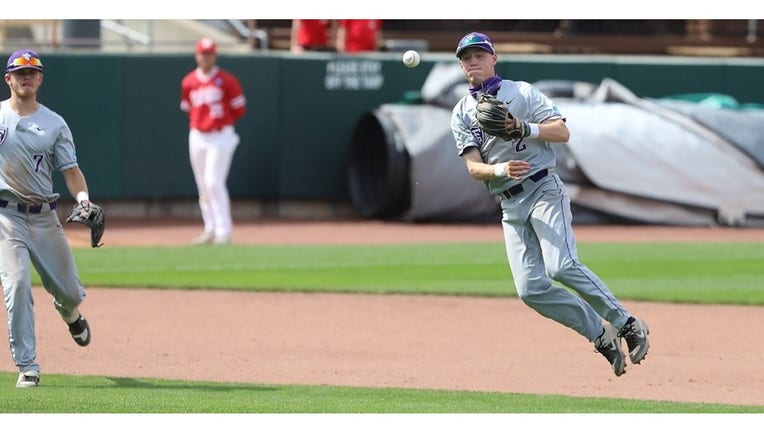 MINNEAPOLIS - The University of St. Thomas baseball team will need to beat Salisbury University of Maryland twice on Tuesday to leave Division III with a national championship.

Both teams entered Game 1 of the championship series on Monday in Cedar Rapids, Iowa, with perfect 3-0 records at the Division III World Series. The Tommies lost Game 1 6-1, and the two teams will meet again for Game 2 in the best-of-three series at 11 a.m. Tuesday. St. Thomas needs to win that game to force a decisive Game 3, or Salisbury wins the national championship.

St. Thomas got out to the early 1-0 lead in the first inning, with three hits to start the game. With the bases loaded and nobody out, Charlie Bartholomew grounded into a double play to bring in the game’s first run.

Salisbury answered in the bottom of the second as catcher Jacob Ference lined a two-run homer down the left field line for a 2-1 lead. Salisbury added to that lead in the fifth, scoring three runs on two grounders that took bad hops on St. Thomas infielders. Complicating matters for the Tommies, right fielder Jake Porter suffered a leg injury during the inning running to field the first of those two base hits, and had to come out of the game. Porter has started every game for the Tommies this season, and is second on the team with a .354 batting average.

Salisbury added another run in the sixth after a lead-off double, and a sacrifice fly to take a 6-1 lead.

The Tommies, who had come into the game with three straight come-from-behind wins at the World Series, were quiet offensively most of the game. They managed just one run on six hits as Salisbury pitchers Jackson Balzan and Clayton Dwyer combined for seven strikeouts.

Duke Coburn got the start for St. Thomas, allowing five earned runs on 10 hits in 4 2/3 innings.

Salisbury has now won 13 straight games and 19 of its last 20, and they’re now 12-0 in the NCAA Tournament. St. Thomas is playing in its seventh College World Series, and fifth championship game. The Tommies won the national title in 2001 and 2009, and most recently finished third in 2014. Monday’s loss snaps a six-game win streak for St. Thomas in the NCAA Tournament.

If the Tommies beat Salisbury in Game 2 on Tuesday, Game 3 would immediately follow.

St. Thomas will move up to play in Division I, starting in the 2022 season.