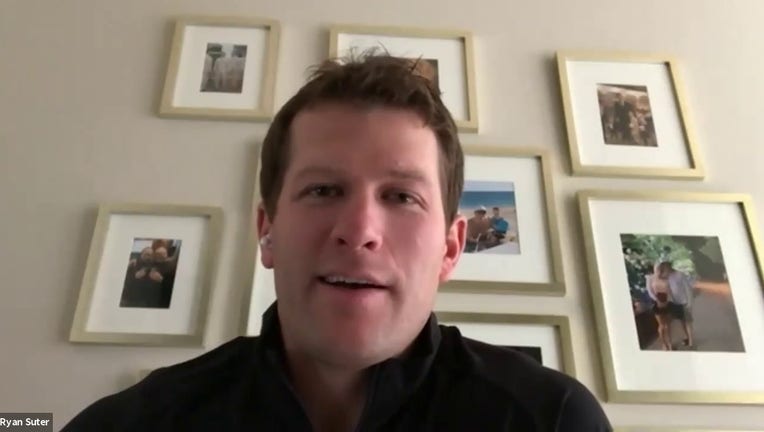 Wild defenseman Ryan Suter talked with Twin Cities media Friday about the team and time away from hockey due to the Coronavirus pandemic.

MINNEAPOLIS - The Dallas Stars are in St. Paul to take on the Minnesota Wild Thursday night, which means it’s the first return trip for Ryan Suter to Xcel Energy Center since leaving the team back in July.

On the morning of July 13, Suter got a call from Wild General Manager Bill Guerin. His contract was being bought out, along with Zach Parise, and the two were no longer a part of the organization. The two signed identical 13-year, $98 million deals nine years ago on the Fourth of July.

Parise signed a one-year deal with the New York Islanders, and the Wild got a 5-2 win over Parise in his return to Xcel Energy Center 11 days ago. Suter signed with the Stars, and admitted after morning skate on Thursday it was a little different coming to the arena as a visitor.

"It was awkward, having to go a different way is a little different. Once you get in here, it’s just another rink. There will be a lot of emotions obviously. A lot of close friends which are now enemies, but it’ll be good," Suter told reporters. "I’m telling myself it’s just another game, I’m telling everybody. Once it gets started, it’ll be normal."

The Wild was a playoff team eight times in the nine years Parise and Suter were teammates in Minnesota, but never got past the Western Conference Semifinals. Suter said part of his return to St. Paul including having a dinner out with family and friends Wednesday night.

It was in part to spend time together, and to say goodbye to people he didn’t get the chance to in the offseason. He fought emotions talking about it.

"Last night my family came up and we went to dinner with a bunch of friends. Hanging out with those guys and saying bye last night, that’s tough," Suter said.

Suter played in 656 games with the Wild over nine seasons and had 55 goals and 369 points. He is the franchise leader in scoring, assists, power-play assists, plus/minus rating, shots on goal and time on ice among defensemen.

"He’s meant a lot to the organization. Not only on the ice, but off the ice and in the community, both those guys did so many really good things for the entire organization, the city, the state when they both came here," Wild coach Dean Evason said. "I’m sure it’ll be a special night for him, we enjoyed his time here but we want to beat him as much as we want to beat the Dallas Stars."

With the roster now centered around Kirill Kaprizov, Kevin Fiala, Jared Spurgeon, Joel Eriksson Ek and others, the Wild is fifth in the Western Conference at 20 points and 6-4 in its last 10 games.