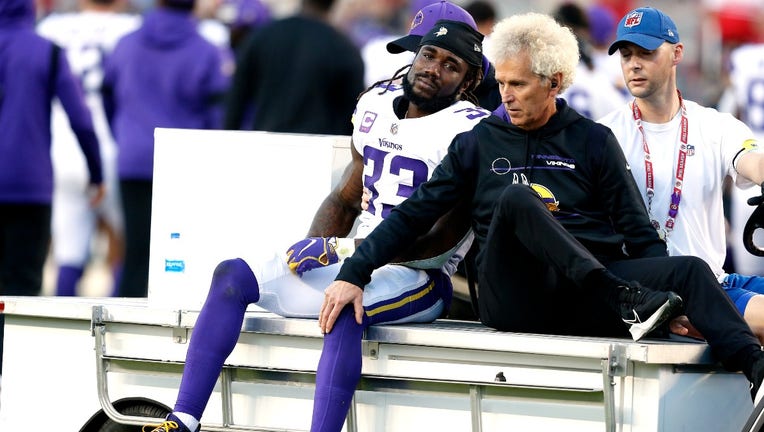 Dalvin Cook #33 of the Minnesota Vikings is carted off the field after being injured in the third quarter of the game against the San Francisco 49ers at Levi's Stadium on November 28, 2021 in Santa Clara, California.  ((Photo by Lachlan Cunningham/Getty Images))

Cook was injured during the third quarter of Sunday’s 34-26 loss at the San Francisco 49ers. He fumbled on the play, and went down in immediate pain grabbing his left side. Cook was on the ground with trainers for several minutes before being carted off the field, and was soon after ruled out of the game.

Cook had 103 total yards from scrimmage before leaving injured.

Did Cook tear his labrum?

Zimmer was then asked if Cook dislocated his shoulder, or if he would declare the nature of the injury.

"We’ll just see how Dalvin is doing, he’ll be day to day and we’ll see where it goes. I don’t know, it’s day to day, that’s what they’re telling me," Zimmer said.

According to Ian Rapoport with NFL Network, Cook suffered a torn labrum along with a shoulder dislocation and is expected to miss a few games to let the injury heal. Cook has already missed time this year with an ankle injury, suffered Week 2 at Arizona. In nine games this season, Cook has 773 yards rushing, is averaging 4.3 yards per carry and has four rushing touchdowns. He also has 27 receptions for 202 yards.

According to Rapoport, Cook was already dealing with a torn labrum on the other side, In his absence, Alexander Mattison had seven carries for 21 yards, including a 6-yard touchdown. Kene Nwangwu, who had a 99-yard kick return for a touchdown, had one carry for seven yards.