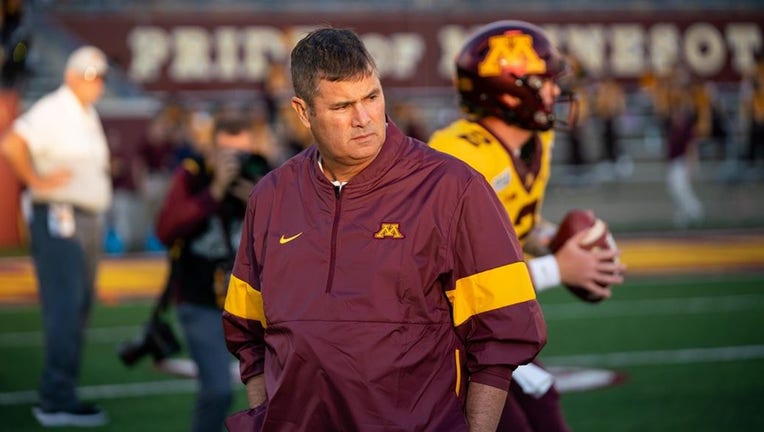 MINNEAPOLIS - University of Minnesota football coach PJ Fleck made it official Monday night: Kirk Ciarrocca is returning the Gophers in 2022 as the offensive coordinator and quarterbacks coach.

Ciarrocca held both roles under Fleck with the Gophers from 2017-19. The hire is pending approval from the Board of Regents.

Ciarrocca left after the 2019 season to take the offensive coordinator position at Penn State under James Franklin. This past season, he was an offensive analyst at West Virginia, which is the Gophers’ opponent in the Guaranteed Rate Bowl on Dec. 18 in Phoenix, Ariz.

Ciarrocca was also the offensive coordinator for four seasons with Fleck at Western Michigan.

He officially started on Monday, but will be coaching in the Guaranteed Rate Bowl. Wide receivers coach Matt Simon will call the plays.

"We are excited to welcome Kirk back to Minnesota," Fleck said in a statement. "Kirk is one of the best offensive coordinators in the game, but he is also a tremendous person. We have a long professional history of working together, and I look forward to reuniting with him.

He was named a semifinalist for the Broyles Award that season, which goes to the top assistant in college football. The Gophers joined Alabama and LSU as the only schools in the country to have two 1,000-yard receivers in Rashod Bateman and Tyler Johnson, and a 1,000-yard rusher in Rodney Smith.

Ciarrocca was also the coach for Tanner Morgan, who set single-season records in 2019 for yards (3,253), touchdown passes (30), completion percentage (66 percent) and passing yards per game (250.2). Morgan was also one of the most efficient passers in the country in 2019, and was a Second Team All-Big Ten selection.

Ciarrocca will have at least two familiar faces on the offense in 2022. Morgan and Mo Ibrahim are each returning next season.