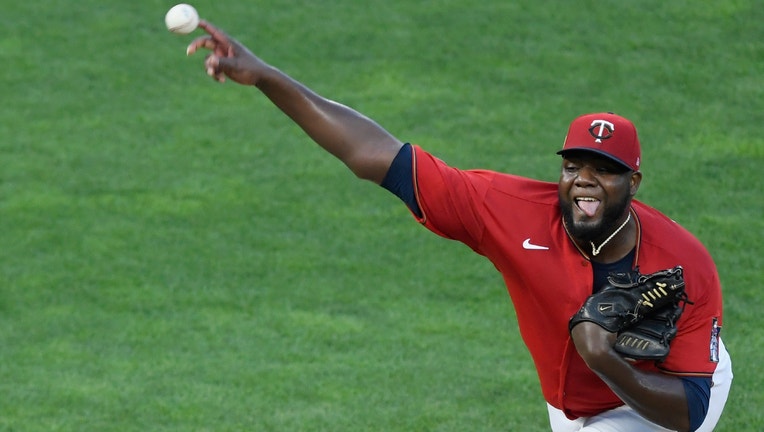 Michael Pineda #35 of the Minnesota Twins delivers a pitch against the Chicago White Sox during the first inning of the game at Target Field on September 1, 2020 in Minneapolis, Minnesota. ((Photo by Hannah Foslien/Getty Images))

MINNEAPOLIS - The Minnesota Twins snapped a six-game losing streak with a 3-2 win over the Chicago White Sox Tuesday at Target Field on a night where Michael Pineda made his 2020 debut and Byron Buxton returned from the injured list.

Pineda, who finished a suspension dating back to last August after testing positive for a banned substance, looked Tuesday like the pitcher he became in 2019. He went six strong innings, allowing just two runs on six hits while striking out four and walking one on 81 pitches, 57 for strikes.

"It was a lot of fun, it was great to see Big Mike go out there and perform so well in his first start back. You could never be any happier with a guy coming out and throwing the ball like that," Twins manager Rocco Baldelli said. "He’s a strike-thrower, so he gives himself a chance every at bat. It was just a heck of a start."

The only runs he gave up, and Chicago scored Tuesday night, came after Miguel Sano tried to field a grounder headed to second instead of retreating to first base. Eloy Jimenez made it hurt with a two-run double as the White took a 2-0 lead in the first inning.

So was he nervous for his first start in nearly a full calendar year?

"A little bit. Very, very excited today for the game and go to the mound and enjoy the game, enjoy the moment. I feel pretty good, especially winning the game for my team. We needed this win," Pineda said.

The Twins chipped away with single runs in the fifth and sixth to tie the game. They got on the board after Jorge Polanco and Nelson Cruz singled, then Jose Abreu dropped what would’ve been an inning-ending double play throw at first on a Marwin Gonzalez grounder. Polanco scored on the play, and the Twins trailed 2-1.

The Twins got the tying run on consecutive pinch-hit extra base hits, the first time that’s happened since April of 1989. Jake Cave tripled to the gap in right center, then scored on Luiz Arraez’s double down the right field line.

The Twins got the go-ahead and eventual game-winning run in the seventh. Nelson Cruz led off with a double, Gonzalez walked and Cruz scored on Buxton’s single to left for a 3-2 lead. Buxton, in his first game back from the injured list, had two hits, the RBI and stole an extra base hit from Edwin Encarnacion with a leaping grab at the wall in the sixth.

"My teammates just told me to be myself before the game and things will happen on its own. I just went out there and played my game. Things fell in place for us," Buxton said after the win.

"It’s not even just the plays he makes, it’s how he makes them. There’s a look to them, he has a tendency to just do things that point you towards winning games," Baldelli said. "It’s kind of cool, it’s enjoyable to watch him play from all perspectives."

After a shaky recent stretch from the bullpen, the Twins got clean innings from Caleb Thielbar, Sergio Romo and Matt Wisler Tuesday night.

The Twins improved to 21-16, and are 1.5 games out of the lead in the American League Central Division, behind the White Sox and Cleveland Indians.